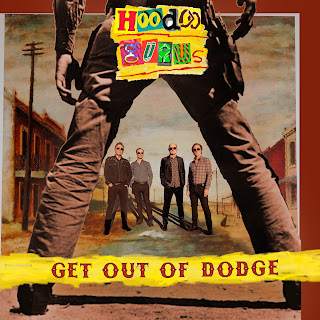 Australian power pop fans have a reason to rejoice now that the Hoodoo Gurus are performing live again. They’ll be at Max Watt’s House Of Music in Sydney November 5 and 6, with The Buoys as their opening act. The rest of us around the globe will have to settle for a new single—they’ve been busy lately—titled “Get Out Of Dodge.” The guitar-driven single, which the band dedicates to “to all the non-conformists out there,” features their friend Vicki Peterson from The Bangles and John Cowsill from The Cowsills as special guests. It’s available on the group’s Bandcamp page, along with “Hung Out To Dry.”

Chicago Drive-In has a multi-act, socially distanced live show going on today at the Seat Geek Stadium in Bridgeview. Long-time Chicago punk band PEGBOY will celebrate its 30th anniversary at the event, and will be joined by fellow hometown acts Local H and The Bollweevils, as well as Jake Burns from the Irish punk band Stiff Little Fingers. The show starts at 5:00 p.m, and $89.99 General Admission/per car tickets are available at Infinity Ticket Solutions.

NIVA (National Independent Venue Association) has its multi-act live weekend concert event Save Our Stages currently streaming on YouTube Music. Several well-known acts will be performing at clubs around the country through tomorrow. There’s no admission fee but viewers can donate money to help entertainment venues stay afloat during this difficult time while waiting for Congress to provide much-needed funds. Artists involved include Jason Mraz; Rise Against; Foo Fighters; The Roots; Portugal The Man; Major Lazer; Black Pumas; Nathaniel Rateliff; Reba McIntire; and The Revivalists.

Tickets are now on sale for Beach Bunny at the Schaumburg Boomers Stadium on October 30; Chicago Soul Spectacular Presents Bird At 100! - A Tribute To Charlie Parker and Dizzy Gillespie at Chicago City Winery on October 31; and Joanna Connor at SPACE on October 30. These listings are taken from the Early Warnings page in the current edition of the Chicago Reader. The page also has information about upcoming livestream events by David Byrne: Billie Eilish; Emmylou Harris; Lilly Hiatt; and Jayhawks. The Chicago Reader can be picked up for free from various places in downtown Chicago and around the north side. You can also find it online, or subscribe so that issues are mailed directly to your residence.

The last of this year’s three RSD Drops takes place next Saturday, October 24. I had thought the Drops trilogy replaced both the April and November Record Store Day events because of the pandemic, but as Fonzie once reluctantly admitted on Happy Days, “I was wrrrrrrrrrrrong.” The official RSD site recently posted the list of limited-edition vinyl that will be available as part of Black Friday Record Store Day on November 27. If you’re going vinyl shopping next Saturday, October 24, make sure you’re looking at the right list. Otherwise, you might show up a month early for the record you want. Check with your favorite record store to see if they’re participating.

Los Straitjackets just released a cover of “Bus Stop,” the 1966 hit single by The Hollies, on its Bandcamp page. The Nashville-based guitar-driven instrumental quartet also has a seven-inch single titled “Beatles V. Stones” coming out as part of the Black Friday Record Store Day. It features them performing “I Feel Fine” and “Time Is On My Side.” Long-time fans know Los Straitjackets also recorded some fun collaborations with veteran Brit musician Nick Lowe.

The Friends Experience: The One In Chicago continues its run at The Shops At North Lincoln Avenue through January 3, 2021. For a $35 admission price, fans of the NBC hit series will be be able to wander through two floors of recreated sets, as well as check out costumes, original scripts and a gift store. Strict social distancing, temperature checks, and other protective measures will be in place.