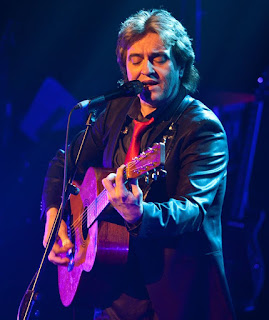 Peter Howarth of The Hollies

Cameos on the chorus. The Hollies have created a video for an Unlocked version of their 1974 hit single “The Air That I Breathe” featuring current members performing it in isolation. It’s a particularly good showcase for lead vocalist Peter Howarth, who was also impressive performing an acoustic version of “He Ain’t Heavy, He’s My Brother” on a clip that was previously posted on the band’s Facebook page. The bare bones arrangement serves the song’s romantic sentiments well, and there’s an additional uplifting message in these difficult times.

Fans will no doubt welcome an opportunity to see the band since it cancelled its U.K. and U.S. tours due to the coronavirus. Some fans will see themselves in the clip—literally. A while back, The Hollies sent out a request via emails and social media for people to film themselves singing the extended chorus at the end. I was one of those who responded, and can be seen on the bottom right corner of a montage that appears around the four-minute-thirteen-second mark. I’m actually more excited by the prospect of The Hollies continuing to create videos like this while fans around the world are unable to see live concerts.

Gigantosaur, the full-length debut from Tiny Bit Of Giant’s Blood is now available on a limited-edition vinyl version, as well as on CD and digital formats. The Chicago-based quartet of club scene veterans offers guitar-driven and spooky glam rock with a consistent vein of satirical humor.

Sharon Lee and Karen Lynn of The Bookends showed their expertise in recreating 1960s garage rock and pop on their Far Away But Around album a few years ago, and now the duo is back with a new single titled “She’s Got It!” The new track exudes a fun espionage ambience that wouldn’t be out of place on an Austin Powers soundtrack. Lee’s bass drives the irresistible beat and both band members sing. The song is available as a digital download on Amazon and Apple music.

The Pretenders have released another song in digital format from its upcoming Hate For Sale album. “Didn’t Want To Be This Lonely,” got its first airplay yesterday on Zoe Ball’s BBC Breakfast Show. Like the previously released title track and “Turf Accountant Daddy,” this new song has the ramped-up energy and lyrical bite fans have come to expect from The Pretenders. “Didn’t Want To Be This Lonely” tackles the complicated emotions of a woman kicking her abusive mate to the curb and adjusting to being alone. Hate For Sale, comes out July 17.
Posted by Terry Flamm at 9:41 PM