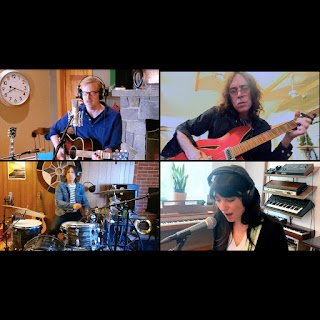 Power pop lost one of its best practitioners when Fountains Of Wayne and Ivy singer-bassist Adam Schlesinger died recently from Covid-19 complications. One of the many tributes to him came about when singer-songwriter Sharon Van Etten and FOW members Chris Collingwood, Jody Porter, and Brian Young—each working separately—recorded a new version of Schlesinger’s song “Hackensack.” It’s an easy-going version that underscores the band’s knack for crafting pleasant melodies with lyrics that combine humor with a touch of melancholy. I had the pleasure of seeing Fountains Of Wayne on a few occasions, and they were fun shows. The song is available to download on the group’s Bandcamp page, with all proceeds going to the New Jersey Pandemic Relief Fund.

Chicago Independent Media Alliance (CIMA), a new organization of independent media outlets spearheaded by publisher Tracy Baim of the Chicago Reader, is running a savechicagomedia  campaign throughout this month. Visitors to the website can choose to have their donation go to one of the outlets or have it spread across all 43 involved. As noted in a fundraising email from Baim, some members of the alliance have encountered revenue losses as high as 85 percent.

Radio station WXRT continues its Live From the XRT Concert Archives series this week with a 1990 performance by Santana at the World Music Theatre in Tinley Park airing tonight; a 2003 Joe Jackson show at The Vic airing Wednesday night; and a 2013 Robert Plant and the Sensational Space Shifters at concert at Taste Of Chicago airing on Friday. Tune in to WXRT at 9:00 p.m. on those nights for the live rock and roll. You can also stream the concerts on the station’s website.
Posted by Terry Flamm at 9:36 PM