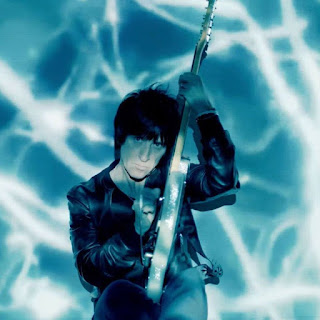 Johnny Marr is one of the stars rocking on social media.

Just a quick reminder that The Fest For Beatles Fans 2020 Virtual Fest is taking place this weekend. The event can be viewed via The Fest’s Facebook and Instagram sites, and will feature live performances of Beatles music by special guests and musicians from Apple Jam stage series. A recent email promises Beatles-related authors and experts will also be on hand. Fan participation is enthusiastically encouraged, so check out The Fest For Beatles Fans website and social media pages for details.

Videos Kill The Corona Blahs. Let’s raise a toast to everyone who’s been chasing away our shelter-in-place blues by posting inspirational messages and live entertainment on Facebook, Instagram, and Twitter. In addition to the above-mentioned Beatles bash, we’ve had Graham Nash singing “Our House,” Johnny Marr strumming a fantastic instrumental on his electric guitar, Nick Offerman using his patented dry humor to describe what his typical day is like, current Doctor Who star Jodie Whittaker alluding to the corona virus and outer space villains in an optimistic “emergency transmission,” and Romee Strijd, Jasmine Tookes, and other famous models challenging each other to send out positive vibes.

I’ve seen several local musicians posting tunes via The WC Series, and others paying homage to the bands and albums that first inspired them to compose their own material. Phil Angotti offered a brand new acoustic song titled “Shy Violet,” and participated in the Fest For Beatles Virtual event. Chicago actress Roxi Heart has been reading from a novel based on the mythological gods Loki and Thor. For a dose of visual culture, you can follow pretty much every famous art museum in the world, including Chicago Art Institute. Keep up the great work, everyone.

Also, while we’re stuck inside, remember the Secret Weapon show on the online Woody Radio station offers the best in new and vintage power pop music, as well as a wide range of “Boris” favorites.

Steve Dawson and Funeral Bonsai Wedding have an album release party for Last Flight Out scheduled for May 8 at the Gary and Laura Maurer Concert Hall. The venue is located 4544 N. Lincoln Avenue in Chicago. In the meantime, the band is offering a Last Flight Out video preview on YouTube. The clip features Dawson and the various artists who help record this enticing collection of classical, jazz and folk music, including the Quartet Parapluie and the Birth Death Breath Singers.

The official Tower Records Instagram page is promising it will be posting some big news in the near future.

The Dream Syndicate’s new single “The Longing” is available on Bandcamp. The song finds the west coast group expertly tapping into its Paisley Underground roots, and serves as an enticing calling card for its The Universe Inside album due out April 10.
Posted by Terry Flamm at 10:31 PM