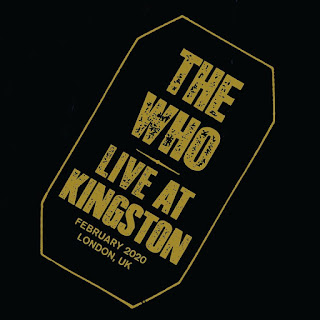 The Who is celebrating the 50th anniversary of its iconic Live At Leeds album with a show tonight at the PRYZM venue in Kingston upon Thames in England. Congratulations, lads!

I wasn’t able to post a Slumgullion column last Friday due to my being at the Hey Nonny venue in Arlington Heights to catch Rachel Drew and Rob Newhouse followed by The Imperial Sound. Singer-songwriter Drew and former Elvis Brothers member Newhouse combined for terrific harmony vocals on set of original tunes (and few covers) as well rollicking versions of the Elvis Brothers songs “Hey Tina” and “Santa Fe.”

Considering Drew’s versatile singing, it was no surprise when she announced she would return as a guest vocalist with The Imperial Sound. Her style was perfectly suited to the mixed bag of soul, rock, and jazz from their 2018 debut The New AM. Drew and lead vocalist-guitarist Rick Mosher combined on songs like “Ain’t Crawling Back,” a clever take on a guy not quite over his ex, and the film noir inspired “The Quarry.” A three-piece horn section and Kenn Goodman’s keyboards also keep things lively.

Tickets are now on sale for Rhett Miller from The Old 97s at SPACE in Evanston on May 15; Bauhaus at the Aragon Ballroom on July 25; Heaven 17 at Park West on May 8; Todd Snider at Park West on April 10; House Of Love at Subterranean on May 11; Ike Reilly Assassination at FitzGerald’s on March 20; and NRBQ at SPACE on May 2.

NRBQ member Casey McDonough will be doing a Valentine’s Day show this Friday at Honky Tonk BBQ. It's located at 1800 S. Racine in the Pilsen neighborhood.

The Psychedelic Furs will kick off a tour of southern U.S. states on April 13 in Key West, Florida and finish up in Scottsdale, Arizona on April 30. They’ll be in London on May 14 for a concert in the Albert Hall. The Furs have new material to showcase at these gigs, to go along with past hits like “The Ghost In You,” “Heartbreak Beat,” and “Love My Way.” A brand new album titled Made Of Rain is due out in May and a video of their single “Don’t Believe” is now available to watch on The Psychedelic Furs website. The duo Elettrodmestico, which features Jane Wiedlin from The Go-Go’s and Pietro Stracci, will open for The Psychedelic Furs on the April tour dates.

The Right Tidys were absent from the Chicago club scene for a while, but now they’ve reunited under the abbreviated name Tidy and have a live gig coming up. They’ll be at Montrose Saloon on Monday, March 30, with Erica Loftus in her familiar lead vocalist role.

FitzGerald’s has an International Women’s Day Festival planned for March 7 that will include performances by Sandra Antongiorgi; Naomi Ashley; Cathie Van Wert; and Katie Todd. The Festival will also feature Cathy Richardson’s Goddesses Of Rock. In addition to her own music, Richardson is also known for her critically acclaimed portrayal of Janis Joplin.
Posted by Terry Flamm at 9:21 PM