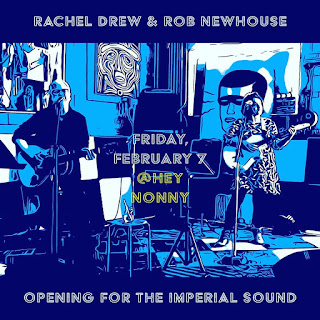 The Imperial Sound, a relatively new band made up of Chicago music scene veterans, will be back at Hey Nonny in Arlington Heights tomorrow night, February 7. Their 2018 debut album The New AM offered a consistently engaging mix of soul, jazz, blues, and rock, with a dash of supper club ambience. Songs like “Ain’t Crawling Back” and “Yesterday” featured guest female vocalists so it should be interesting to see how those are performed at Hey Nonny. The Imperial Sound has been known to have special guests at its live shows. Singer-songwriter Rachel Drew and former Elvis Brothers member Rob Newhouse will be the opening act. The music starts at 7:30 pm.

It was nice seeing Hey Nonny get some press last Thursday via Selena Fragassi’s interview with Chip Brooks in the Chicago Sun-Times. Brooks’ comments affirmed my belief that he and co-owner Chris Dungan are aiming for a northwest suburban version of popular Chicago clubs like Schubas and Evanston’s SPACE. Booking bands like The Imperial Sound is definitely a move that direction. Singer-guitarist Tommi Zender with The 45 (featuring Chicago Cubs Len Kasper) will be coming to Hey Nonny on Sunday, February 16.
Posted by Terry Flamm at 9:00 PM