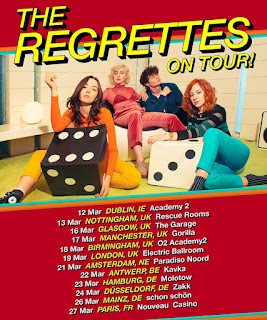 Having recorded a worthy follow-up to their critically acclaimed debut album Feel Your Feelings Fool, The Regrettes will likely be performing songs from the recently released How Do You Love? on their upcoming European tour. The band will be making stops in London, Dublin, Manchester, Amsterdam, Paris, Hamburg, and other cities.

Bruce Cockburn is performing at The Old Town School Of Folk Music in Chicago tonight and tomorrow night.

City Lit Theater Company’s stage production of one of the most popular Sherlock Holmes novels—The Hound Of The Baskervilles—opened tonight and runs through November 10. City Lit Theater is located at 1020 W. Bryn Mawr in Chicago.

Go Time will likely be playing hard-hitting power pop tunes when it performs at Silvie’s on Irving Park Road next Saturday, October 5. They’ll be part of a triple bill with The Spindles, whose recent album has catchy originals like and covers of The Hollies’ “Look Through Any Window” and The Elvis Brothers’ “Santa Fe,” and Crowm Vic Royal.

The Simon and Garfunkel Show comes to the Broadway Playhouse at Water Tower Place November 19 and will run through December 1. A live band will perform hits like “Mrs. Robinson,” Bridge Over Troubled Water,” and “Sounds Of Silence” while photos and film footage of the iconic folk-rock duo are projected on a large screen.

Metric will be releasing a limited edition 10 year anniversary edition of its Fantasies album on gold vinyl. It’s available to order from the Metric online store, along with “Help I’m Alive” t-shirts based on one the album’s best tracks.

Van Go will has a Rock, Roll, Repeat gig at the Gallery Cabaret next Saturday, October 5, an d will likely be showcasing hard-edged but catchy songs like “Live Through This” and “Grim Life” from its most recent effort Everyone Loves You When You’re Gone.

Songs In The Key Of Stevie, the latest musical from Black Ensemble Theatre honoring an iconic rhythm and blues performer (in this case, Stevie Woner), will open on October 5.

Quad Con, a celebration of toys, comic books, art, and games, has six events coming up in the Midwest starting this Saturday in Dubuque, Iowa. It will then move to Peoria, Illinois on October 19; Davenport, Iowa on October 26; Burlington, STATE on November 9; Rockford, Illinois on November 17; and Grand Rapids on January 25.

Professor Moptop, whose ongoing reports on Beatles recordings are one of the many highlights on Terri Hemmert’s Breakfast With The Beatles show each Sunday morning, is coming to my humble village. He’ll be presenting The Beatles’ Abbey Road 50th Anniversary at the Palatine Library on Wednesday, October 2.

The Museum Of Broadcast Communication on State Street in downtown Chicago will present another exhibition that originated at the Rock And Roll Hall Of Fame when Stay Tuned: Rock On TV opens on October 18.

The annual Nightmare On Chicago Street will take place in the downtown area of Elgin, Illinois on Saturday, October 19 from 6:00 p.m. to 11:00 p.m. I’ve been to Nightmare in the past, and Elgin really goes all out to make this festival scary and fun. There will also be a full schedule of rock bands.
Posted by Terry Flamm at 9:59 PM