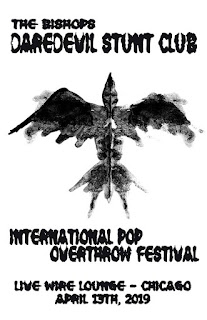 Tickets went on sale today for Dave Mason at City Winery Chicago on August 13 and 14; and Smashing Pumpkins and Noel Gallagher’s High Flying Birds at Hollywood Casino Amphitheater in Tinley Park on August 15.

Singer-guitarist Ani DiFranco will be discussing her new book No Walls and the Recurring Dream with rock critic/author Jessica Hopper at Everybody’s Coffee in Chicago’s Uptown Neighborhood on May 10. The tour will also include stops in New York; Boston; Washington, D.C.; and Los Angeles.

SXSW kicked of today and will offer live music, conferences, and film screenings at various venues around Austin, Texas through March 17.

I was sad to see on social media that Sara Romweber from Let’s Active has passed away from cancer. The trio emerged in the early 1980s with spirited coed vocals and irresistible power pop songs that included the FM radio hit “Every Word Means No.” Singer-guitarist Mitch Easter is now the only remaining member; bassist-vocalist Faye Hunter left us in 2013. I still have all of their albums.

He comes to Chicago as he pleases. Graham Nash is getting to be a regular visitor here, with a number of concerts in town over the past few years. I’ve seen him at The Arcada in St. Charles, City Winery Chicago, and the Old Town School Of Folk Music. His concert next Sunday, March 17 at The Athenaeum Theatre is a benefit for the Old Town School Of Folk Music’s music education programs.

Local bands Sonia Dada; The Way Moves; Nicholas Tremulis and The Prodical 9; and Dick Holiday and The Bamboo Gang join host WXRT air personality Lin Brehmer for Kocour Fest – A Celebration of the Life of Steve Kocour this Monday, March 11 at Metro. Kocour was a highly regarded and popular sound/lighting expert and teacher who worked with several bans in the Chicago area.

I had never heard of Peter Capaldi before his terrific portrayal of The Doctor on Doctor Who, and now that I’m following him on social media, I’d like to be in a comedy group with him.

Looks like I’m not the only one who writes rock and roll fiction. Pete Townshend, whose rock operas Tommy and Quadrophenia were packed with drama, humor, and vivid characters, has a novel titled Age Of Anxiety coming out in November. Reportedly, it’s about his generation and the music industry in general.

As reported by Chris Jones in the Chicago Tribune and Stefano Esposito in the Chicago Sun-Times, Steppenwolf Theatre is getting a $54 million upgrade. The additions include a 400-seat theater-in-the-round and an education center. The highly acclaimed Steppenwolf was the starting point for John Malkovich, Gary Sinise, and Laurie Metcalf.

Theatre Nebula’s production of the Duncan Sheik/Steven Sater musical Spring Awakening has begun its run at Cutting Hall in Palatine and will continue through March 24. Kevin Wiczer directs a cast of 13, with choreography by Kristine Burdi.

Also in Palatine, Christie’s Dairy Delights in downtown Palatine will present its next Rock ‘N Roll Ala Mode open mic event on March 13.
Posted by Terry Flamm at 10:33 PM