He Comes To Chicago As He Pleases 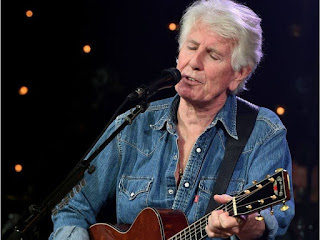 Graham Nash has been a regular visitor to the Chicago area over the past few years. He’s performed at The Arcada in St. Charles, City Winery Chicago, and The Old Town School of Folk Music, as well as a gig in Skokie that was the only one of his recent tours I missed. His show coming up this Sunday at the Athenaeum Theatre on Chicago’s north side is a benefit for the Old Town School Of Folk Music’s music education programs. According to an article in the Asbury Park Press by Alex Biese (and linked to Nash’s official Facebook page), his current touring band consists of guitarist-vocalist Shane Fontayne and keyboards player-vocalist Todd Caldwell.

Nash has already formed a musical bond with Fontayne, a veteran of tours with Sting and Bruce Springsteen. He and Fontayne crafted gorgeous harmonies together on the concerts mentioned above, and they also write songs together. Caldwell’s resume includes working with Crosby, Stills and Nash. It seems likely the addition of a third player will improve the already impressive team of Nash and Fontayne. This Sunday’s show will be a couple hours long, with an intermission dividing two separate sets. Nash has been including a few Hollies songs in his shows during the past few years, and it would be great to hear him delve even deeper into the earliest days of his stellar career.
Posted by Terry Flamm at 9:53 PM