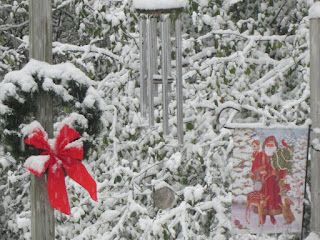 Singer/multi-instrumentalist Joe Algeri from Australia and singer/bassist Herb Eimerman from the USA collaborate as members of The Britannicas through the magic of modern technology. (Guitarist/vocalist Magnus Karlsson and drummer Stefan Johansson from Sweden make up the rest of the international power pop band.) Algeri and Eimerman have also pursued separate musical paths for years. Algeri records as the one-man band The JAC (with occasional help from others) and also works with The Outyders and the appropriately named The Jangle Band. Eimerman is a veteran solo recording artist and joined forces with Jeff Murphy of Shoes for the side project Nerk Twins. His heartfelt and melodic ballad “You Gave Me” is one of the many highlights on the Yuletunes power pop holiday compilation produced by Murphy back in 1991. And now, Algeri and Eimermann have both released new holiday songs that are available for a free download.

Algeri’s wistful “December” continues his 18-year tradition of offering a new Christmas song for a free download on his Bandcamp page. As with past efforts, it’s a bit off kilter, with a chiming pop arrangement that evokes 1960s bands like The Byrds. There’s also a nice dose of Beach Boys style vocals as Algeri relates how the twelfth month always brings back memories of an old flame he once sipped spiced rum with and who also had an affection for Soft Boys records. The catchy arrangement features Algeri on lead vocals, guitar, and piano; Eimerman on bass and backing vocals; and Swedish musicians drummer Stefan Johansson and organ player Lars Bruselll.

Eimerman’s catchy and cheerful “Don’t Ask For More” suggests every day can be Christmas, and features jangling guitars directly inspired by Roger McGuinn. It’s more rock oriented than his much earlier “You Gave Me,” but Eimerman once again uses the holiday to reflect on what’s really important in life. He plays most of the instruments, with help from Algeri on 12-string Rickenbacker and Australian Mark “Sid” Eaton on drums. “Don’t Ask For More” is available for free download on Joe Algeri’s Bandcamp page.
Posted by Terry Flamm at 9:49 PM