Moon Darling – By The Light Of The Moon 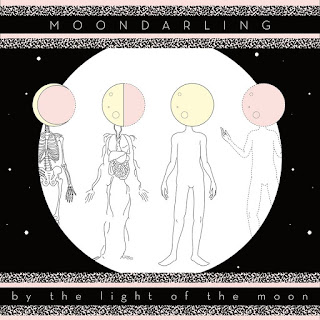 Released earlier this year, the seven-song EP By The Light Of The Moon is an impressive second effort from Moon Darling. It follows Dreams, which introduced the Seattle-based band’s hypnotic and self-described “psych rock” in 2016. Lead vocalist-lead guitarist Michael Julian Escobar once again spearheads an adventure that touches on several genres without locking in on any of them.

Escobar and bandmates drummer Michelle Nuño, keyboards player Mathew Buckner, and bassist Jack Jay have a knack for immediately grabbing the listener’s attention with playful intros. “Soul Mine” kicks off with some familiar scary music before shifting to an energetic arrangement, and “Don’t Rise” opens with exotic middle-eastern instrumentation. “Right All The Time” drifts in on Buckner’s atmospheric keyboards but then morphs into an earthy blues number.

Escobar’s distinct vocals capture the emotional sentiment of the title track, which also features an irresistible groove. And on songs like “When The Morning Comes” and “Learned Amongst The Sky,” his fluid guitar playing evokes Robin Trower on Bridge Of Sighs. “She Said (The Key)” finds Moon Darling taking a lighter approach, but still allows Nuño to showcase her powerful drumming.
Posted by Terry Flamm at 9:20 PM