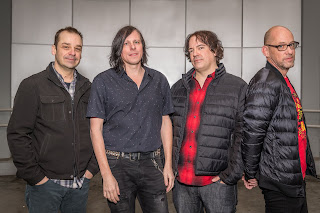 It’s hard to imagine a better place for Chicago area power pop fans to be this Saturday night than at Park West for a double bill of The Posies and Material Reissue. The Posies, in the midst of their 30th Anniversary Tour, will be drawing from a wealth of albums, including Dear 23, Frosting On The Beater, and Blood/Candy. The set list is sure to include irresistible gems like “I May Hate You Sometimes,” “Suddenly Mary,” “Dream All Day,” and “So Caroline.” Singer-guitarist Jon Auer and singer-guitarist Ken Stringfellow have been the band’s nucleus for all these years, and their harmonies remain impeccable.

Material Reissue includes Material Issue founding members bassist-vocalist Ted Ansani and drummer Mike Zelenko, along with singer-guitarist Phil Angotti, who was a good friend of the late Jim Ellison. The new formation came together for an International Pop Overthrow - Chicago gig a few years back that packed the house at The Abbey Pub. They still perform occasionally on the local club scene, and opened for Matthew Sweet at Park West a few years ago. Original tunes like “Valerie Loves Me,” “Diane,” and “Renee Remains The Same,” along with their cover of The Green Pajamas’ “Kim The Waitress” still pack a melodic whallop. Singer-guitarist Terra Lightfoot is also on the bill, and will be playing songs from her recently released album New Mistakes. The music starts at 8:00.
Posted by Terry Flamm at 9:33 PM