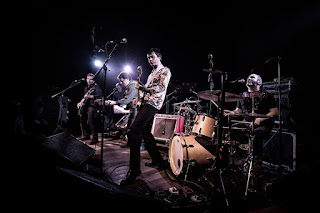 He’s not a million miles away, he’s right here in Chicago. Peter Case, a founding member of The Nerves and The Plimsouls, is performing tonight in Szold Hall at The Old Town School Of Folk Music.

Chicago-based power pop band Frisbie will celebrate its 20th anniversary in style tomorrow night at Martyrs’ on Lincoln Avenue. The band has opened for Matthew Sweet, Big Star, Cheap Trick, and other big names on the power pop scene. Their first album The Subversive Sounds Of Love is still considered a classic of the genre. The Sunshine Boys haven’t celebrated their first anniversary yet, but their years of experience in other bands no doubt helped them create Blue Music, which is sure to be one of the best albums of 2018. They’re also on the bill at Martyrs’ tonight, as well as The Plutonians.

There will be a Van Go Concert! tomorrow night at Phyllis’ Musical Inn on Division Street. The Chicago-based band, which has a flair for energetic, catchy songs that frequently pack a satirical punch, will be showcasing its upcoming album. Deadly Bungalows and Trita, and are also on the bill tomorrow night.

Independent Bookstore Day, a national celebration of the cool and courageous retailers who still stock books, takes place tomorrow. Some stores will offer special events and snacks for patrons. The official website can tell where these magical places can be found in your area.

The Ides Of March will be at City Winery Chicago next Thursday; Suzanne Vega has shows coming up there next Saturday and Sunday, and Graham Parker with James Maddock, performs on May 10. Later at City Winery, The Cathy Richardson Band will be headline at a benefit for the Olivia Newton John Cancer Center. That event is on May 23.

The Breeders will be performing with special guests Melkbelly on May 8 at The Vic, and The Brian Jonestown Massacre will be at that same venue on May 11.

Issue number 6 of The Seen – Chicago’s International Journal of Contemporary and Modern Art is now available for free in newspaper boxes in the downtown Chicago area. Stephanie Cristello is Editor-In-Chief.

The more the merrier. 33 To Nothing, at least the fourth play based on rock and roll to be staged in Chicago during the past few months, runs through May 27 at A Red Orchid Theatre. Aaron Holland plays the lead vocalist of band that’s coming undone due to emotional struggles among its members. The Grant James Varjas play unfolds in real time in director Tyrone Phillips’ production.

Get your paws off my popcorn! There will be a Special Wednesday Night Screening of the original Planet Of The Apes at The Pickwick Theatre in Park Ridge on May 16. This year marks the 50th Anniversary of the film. Tickets for the Pickwick screening are $10/$8 Advance, and there will be prelude music provided by Jay Warren. Who is an ape. Just kidding about that last part.

Art Encounter, a nonprofit art education organization, is hosting an event to honor gallerist William Lieberman on Sunday, May 6 at the Evanston Women’s Club.

The weather outside is frightful, but one sure sign warmer temperatures are on the way is the annual festival guide in the RedEye free weekly newspaper. Each year, I rip out these pages and save them through the end of September. As usual, the latest version includes street fests, art fests, film fests, charity events, and concerts taking place around the Chicago area over the spring and summer. RedEye is available in boxes around downtown and northside neighborhoods.

Birdland, writer Simon Stephens’ musical about the chaotic life a rock and roll superstar, continues its run at Steep Theatre through May 12. Joel Reitsma has been getting a lot of praise from local critics for his work as the lead character. Jonathan Berry is the play’s director.

There will be an opening reception on May 12 for the Tony Fitzpatrick: The Secret Birds at the DePaul Art Museum. On May 23, Fitzpatrick will have a conversation with Chicago Tribune writer Rick Kogan from 6:00 to 7:30 p.m.
Posted by Terry Flamm at 8:42 PM