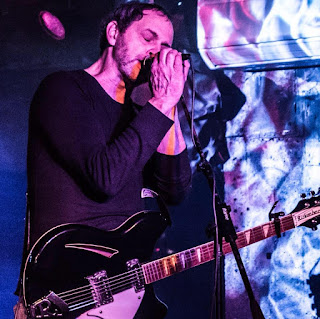 It’s always a pleasure to welcome David Bash back to Chicago. Although he’s a West Coast native, he knows our local music scene by heart. That’s because he’s been bringing his International Pop Overthrow festival here for several years. In fact, Chicago was one of the first cities Bash put on his itinerary, following its debut in Los Angeles. IPO now visits New York, Detroit, Toronto, London, Liverpool, and other cities. Each has its own collection of performers—mostly local, along with a few out-of-town acts who travel the circuit.

Kalamazoo, Michigan native Jeremy Morris, one of the artists that follows Bash from location to location, opens IPO-Chicago’s 2018 nine-day run at The Heartland Cafe Bar tomorrow night. He’s an innovative guitarist who’s been known to blow the four walls down with his original psychedelic rock. Chicago-based singer-guitarist Phil Angotti is another IPO standout, and he was at the very first International Pop Overthrow in Los Angeles with his band at that time, The Idea. In addition to performing tribute shows to 1960s acts, he’s a first-rate songwriter whose latest album Such Stories is filled with acoustic gems.

Rob Schultz has a knack for putting political and social satire to catchy melodies. It’s likely this IPO veteran will have something to say about the current political climate. His most recent album came out last July. Ginger Records recording artists Weekend Vinyl formed in 2005 and have a number of IPO gigs under their belt. They recently released their latest album of power pop, Beguile Me.

The local quintet Bad Bad Meow has had success with the singles “Freak Flag” and “Hear You,” and recently released the full-length effort Fake News! Tomorrow night’s final act Kurt Michaels Continuum has shared gigs with Denny Laine from Wings and The Moody Blues. Their latest effort is titled Soaring Back To Earth. Check out the official International Pop Overthrow website for the full schedule and links to most of the bands.
Posted by Terry Flamm at 10:22 PM