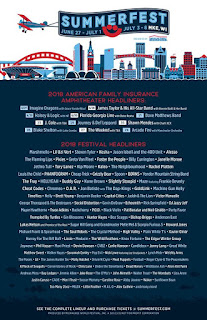 Cheap Trick; Matthew Sweet; Buddy Guy; The Posies; James Taylor; Pixies; Foster The People; Janelle Monae; Jethro Tull; Spoon; Social Distortion; Mayer Hawthorne; Gin Blossoms; Michael Franti and Spearhead; and Nick Lowe featuring Los Straitjackets are among the acts that will be performing at SummerFest in Milwaukee this year. The annual festival runs from June 27 to July 1, and the July 3 to July 8.

Chicago Repertory Ballet is presenting Modern Motions at The Atheanaeum Theatre on tomorrow, April 6 and Saturday.

The English Beat, one of the best ska revival bands that sprang up in the UK in early 1980s, will have people up and dancing at City Winery Chicago tomorrow, April 6 and Saturday.
Posted by Terry Flamm at 5:30 PM