Rocking Around On XRT For The Christmas Hop Music 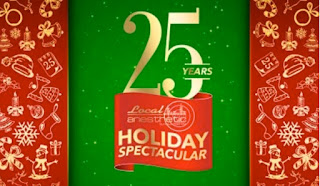 WXRT radio personality Richard Milne will mark 25 years of doing his Local Anesthetic Holiday Spectacular tomorrow night with an hour-long special beginning at 8:00 p.m. The concept of inviting Chicago area musicians to send a brief song or comedy bit to hype their band, Milne’s show, and the holiday season has yielded many entertaining and frequently hilarious results over the years. It’s also a kick to hear so many well-known acts participating. The only drawback of this year’s greatest hits package is that no new entries were accepted.

In an earlier post on WXRT’s website, Milne explained his decision to eliminate new stuff from the mix: “Let me get cracking on listening back to hundreds and hundreds and hundreds and, holy crap, do I have more than a thousand of these damn things, er, precious historical artifacts from Holiday Spectaculars from Christmases past to listen to?” The 25th Anniversary Local Anesthetic Holiday Spectacular will be rebroadcast on Christmas Day at 8:00 p.m. Congratulations to Milne on his many years of casting a spotlight on the Chicago music scene via his Sunday night Local Anesthetic radio show.

Earlier on December 25, WXRT personality Terri Hemmert will be doing a special holiday version of her weekly Breakfast With The Beatles program. Being a life-long fan has enabled Hemmert to collect a number of rare Beatles-related audio treasures that she’s willing to share with her listeners. And yes, that usually includes those exclusive off-the-wall holiday messages John, Paul, George, and Ringo sent to their fans back in the 1960s.

Little Steven Van Zandt’s syndicated Underground Garage radio show, which can be heard Sunday nights at 9:00 on WXRT, also gets pretty festive at this time of year. Van Zandt has released some of the more rare tunes from his massive collection on the Christmas A Go Go CD. (See December 17 and 18, 2011 in the BHT archives for my two-part review.) I’m not sure if the Underground Garage holiday special will be tomorrow night, Christmas night, or both. But it’s always fun to check out what gifts Van Zandt is ready to put under our musical Christmas trees.
Posted by Terry Flamm at 9:17 PM