Carrying On The Abbie Fest Spirit 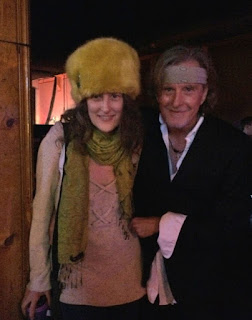 Carla Hayden and James Moeller have a new performance art series in mind.

The closing ceremony at the final Abbie Hoffman Died For Our Sins Festival staged by Mary-Arrchie Theatre this past August included a call-to-action from Artistic Director Rich Cotovsky in his role as the rebellious Yippie. As the annual performing arts festival drew its last breath after 28 years, Cotovsky/Hoffman implored the participants and audience members to never let the Abbie Fest spirit die. Black Forest, one of the theatre groups in attendance that night, are probably in the best position to carry out that goal.

Founded by Carla Hayden and James Moeller, Black Forest appeared at several Abbie Fests. Most of their shows mixed clever wordplay, provocative ideas, and humor. Even if you didn’t always know what Hayden and Moeller were reaching for, their performances had an off-kilter charm. In more recent years, they’ve fronted whitewolfsonicprincess, an indie rock/avant garde band that has now fully established its own identity.

whitewolfsonicprincess (they prefer all lowercase letters) have released two albums, including this year’s beguiling Shadow Of The Marigold. A lot of their shows have been multi-act affairs at the Red Line Tap, and they’ve organized at least one production that included standup comedy and performance art. Hayden and Moeller have a new idea for 2017, called The R and R Circus.

According to Moeller’s Facebook post, it will be a once in a while Sunday afternoon event, and they’re looking for “bands, solo acts, comics, poets, jugglers, contortionists, pie-tin spinners, dancers, sword-swallowers, [and] kazoo players.” If you’re any of the above and want to join in the fun, contact Hayden and Moeller via their recently restructured whitewolfsonicprincess website.
Posted by Terry Flamm at 10:30 PM