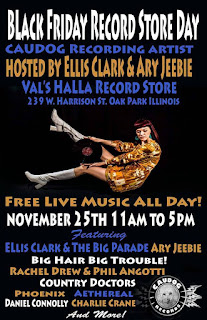 The Black Friday version of Record Store Day has yet to achieve the success of the original that comes in April each year. But Val's Halla Records in Oak Park, IL is once again going all out to commemorate day-after-Thanksgiving record hunting. CAUDOG recording artist and Chicago music scene veteran Ellis Clark will be hosting a free event at the store from 11:00 a.m. to 5:00 p.m. with his band The Big Parade and special guest vocalist Ary Jeebie from the The Amazing Heebie Jeebies.

In addition to his solo career, Clark has performed with Epicycle, Social Act, and The Handcuffs. Other guests scheduled for the Val’s Halla bash include Country Doctors, featuring Doug Cocoran; Phoenix; Aethereal; Big Hair Trouble!, Ary Jeebie’s tribute to 1960s and ‘70s country; Phil Angotti; Rachel Drew And The Bitter Roots; Daniel Connolly; Charlie Crane; and The Dyes. Val's Halla Records will be open from 9:00 a.m. to 7:00 p.m. on Friday, November 26. Other stores in the Chicago area will be taking part in Black Friday Record Store Day, so you might want to check in with your favorite one to see if there's anything special going on.

As for Black Friday Record Store Day itself, there is once again an amazing variety of genres involved, including classic and mainstream rock, punk, country, jazz, soul, classical, blues, heavy metal, rap, soundtracks, holiday, and techno. Here's a look at some of the records that caught my eye.

The Bangles - Ladies And Gentlemen . . . The Bangles red vinyl edition of rarities previously released in digital and CD format; The Beach Boys - Becoming The Beach Boys 19-track LP of songs from 1961–1963 on red, blue, and yellow vinyl; The Cars -seven-inch “Just What I Needed”/“I’m In Touch With Your World” picture disc; The Kinks - Sleepwalker LP on black and white swirled vinyl and three separate seven-inch EPs; The Monkees - Good Times! Plus! ten-inch EP with four tracks that weren’t on the band’s critically acclaimed CD.

The Raconteurs - “Steady As She Goes”/Store Bought Bones” on green vinyl; The Ramones - 16-track Live At The Roxy 8/12/76 LP; Rolling Stones - “Ride ‘Em On Down” on ten-inch blue vinyl; The Turtles - mono version of Golden Hits LP on colored vinyl; The Yardbirds - vinyl edition of 2003 studio album Birdland with a bonus live version of “Dream Within A Dream.”
Posted by Terry Flamm at 10:02 PM