The Vulgar Boatmen - You And Your Sister - 25th Anniversary Edition 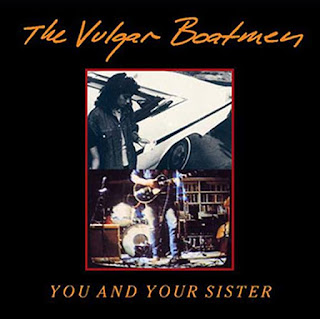 The remastered 25th Anniversary Edition of You And Your Sister celebrates an album that never found mainstream success but is highly regarded by indie rock critics and fans. Originally released by The Vulgar Boatmen in 1989, it’s a showcase for Robert Ray and Dale Lawrence, a songwriting duo that lived miles apart and collaborated by mailing cassettes to each other. On this impressive debut, the Indiana and Florida-based band switches back and forth between ballads and rock songs, while spinning one gorgeous melody after another.

Ray and Lawrence’s descriptive lyrics set tales of romantic entanglements in picturesque backgrounds. The hard-edged “Change The World All Around” begins with the line, “Last night, I was standing in the driveway calling your name,” and the heartfelt “Decision By The Airport” has a spare but effective acoustic arrangement. The classic road song “Drive Somewhere,” which gave The Vulgar Boatmen a loyal following via extensive airplay on Chicago FM station WXRT, offers over five minutes of irresistible roots rock.

The guitar-driven “Drink More Coffee,” which was written by founding member Walter Salas Humara and vocalist Carey Crane, concerns a guy dying to meet a woman he sees while waiting in a bus station. “Margaret Says” is another interesting tale set to a catchy rock arrangement, while the ballad “Katie” features impressive harmonies. The three bonus tracks include a cover of The Monkees song “The Kind Of Girl I Could Love.”

The Vulgar Boatmen have a show coming up at Schubas in Chicago on January 7.
Posted by Terry Flamm at 10:32 PM