The Zombies - Still Got That Hunger 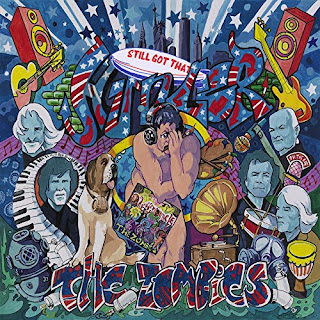 When The Zombies wrapped up their recent U.S. tour at The Arcada Theatre in St. Charles a few weeks back, they included a number of songs from their 2015 album Still Got That Hunger. It was a risky move to try out new material in front of an audience eager for “Time Of The Season,” “Tell Her No,” and “She’s Not There,” but The Zombies knew what they were doing. Founding members vocalist Colin Blunstone and vocalist-keyboards player Rod Argent, with help from bassist-vocalist Jim Rodford, drummer Steve Rodford, and guitarist-vocalist Tom Toomey continue to draw upon the American blues and soul music that has inspired them since the early 1960s.

The Argent-composed “New York” harks back to the first time The Zombies toured America, and were warmly welcomed by artists like Patti Labelle and Aretha Franklin. Argent wrote all but one of these 10 tracks, and his keyboards work plays an prominent role throughout. Blunstone still possesses amazing power and range; whether he’s belting out the hard-edged “Moving On” or soaring on “Edge Of The Rainbow.” His own composition “Now I Know I’ll Never Get Over You” is one of the more pop-oriented tunes on Hunger, and features Toomey’s ringing guitar.

Along with highlights like the gorgeous harmonies on the romantic “And We Were Young Again” and the jazzy piano on “I Want You Back Again (2015),” there’s a theme running throughout Still Got That Hunger about overcoming adversity and looking forward to whatever comes your way. It can be found in the line “What doesn’t kill me will fill me with life” from “Moving On” as well as on “Chasing The Past,” when Argent vows, “Now we’ll take tomorrow and give it hell.”
Posted by Terry Flamm at 10:31 PM