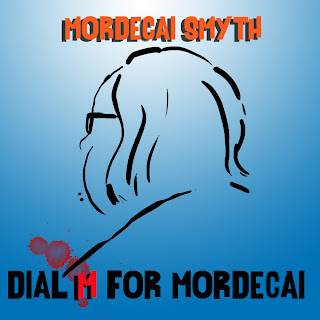 English musician and honorary Palatine, IL resident (my doing, actually), Mordecai Smyth, has once again emerged from his laboratory with a fun mixture up of original British Invasion rock and spooky imagery. A fascination with Alfred Hitchcock that manifested itself in “Mr. Hitchcock” on his debut, Sticky Tape And Rust, is evident once again on this new EP’s title and cover art. But there are no witches or killers on Dial M For Mordecai; just the odd sensation of losing oneself in an abyss.
On “Trapped,” a mid-tempo song built with guitars and keyboards, a bout of nasty weather turns into something more sinister. The peppier “Psychedelic Sarah” has a more pleasant vibe, but still conjures a mind-altering experience. The remaining three tracks offer more down-to-earth tales, such as “Dream On,” which depicts a lonely woman whose only escape from her dreadfully dull existence is to lose herself in daydreams. “In her life there is no change,” Smyth sings. “There’s nothing to enjoy.”

The opening guitar on “Dark Haired Douglas” evokes a mid-1960s Beatles hit before the song switches to a Kinks-like satire. The title character fancies himself an irresistible ladies man but meets his match when he’s snubbed by a gorgeous woman in a trendy rock club. A Beatles/Kinks mash-up occurs again when Smyth covers the Ray Davies-penned “See My Friends.” This new version has a more overtly psychedelic arrangement that drifts naturally into “Norwegian Wood.”

That it works so well is further testament to Mordecai Smyth’s knowledge and affection for classic 1960s pop.
Posted by Terry Flamm at 11:16 PM