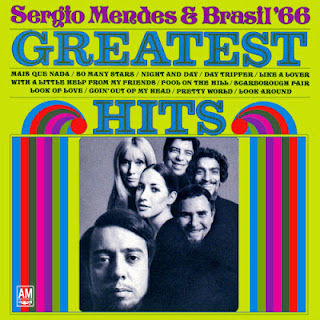 First, I'd like to wish the happiest of birthdays to my lovely wife, Pam. Even though this historic event falls nigh to Christmas, I've never let it get lost amidst the holiday celebrating. As I've said before, I wouldn't be able to do this blog without her amazing technical knowledge. One of Pam's all-time favorite songs is "Mas Que Nada"  by Sergio Mendes And Brasil 66. So, here’s to you, Sweetie. Happy Birthday!

Looks like we survived the Mayan doomsday. Here’s a  video of The Hollies performing an appropriate song for the occasion.

The long and winding road will lead Liverpool Legends back to their original home state of Illinois tomorrow night when the Beatles tribute band performs at City Limits in Schaumburg. It's a release party with members Kevin Mantegna, Marty Scott, and Bob Dobro performing acoustic versions of original songs from the group's It Is What It Isn't CD. Liverpool Legends has been playing Branson, MO for a few years now. Show time is 10:00 PM.

Just a reminder that I'm looking for people to send me a one-sentence description of their creative plans for 2013. I'll post as many as I can here on January 1st. So far, the response has been overwhelming. Well, I got two emails. Hopefully, more are on the way.

I'm looking forward to Not Fade Away, a new film from Sopranos creator David Chase, that opens next Friday, December 28th. It's being billed as a rock and roll love story inspired by 1960s music. The soundtrack features songs by The Rolling Stones, Small Faces, and other 1960s artists.

Wish I could make this show: There’s a double bill featuring psychedelic rockers Tomorrow The Moon and power pop masters Pezband coming up at FitzGerald’s on January 4th. Hopefully, they’ll schedule some more dates together.
Posted by Terry Flamm at 12:08 AM