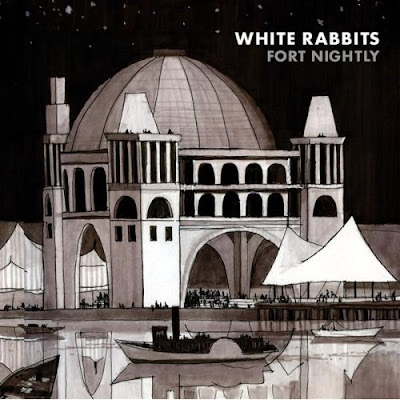 Note: This review originally appeared in the Illinois Entertainer in July, 2007.

White Rabbits hail from New York, but their ability to evoke old time British music hall days aligns them with U.K. acts like Supergrass and Madness. The sextet also infuses the catchy rock songs on their debut, Fort Nightly with elements of big band jazz and Latin rhythms. Drummers Matt “The Duck” Clark and Jamie Levinson drive nearly every track, but it’s the singing of lead vocalist/guitarist Greg Roberts and lead vocalist/keyboards player Steve Patterson that will probably garner the most attention for White Rabbits.

Roberts and Patterson, along with guitarist/back-up vocalist Alex Edge bring even the quirkiest lyrics to life with their elaborate three-part harmonies. Patterson’s inventive playing consistently adds an exotic flavor, whether it’s on the mid-tempo “Dinner Party” or the rollicking opener, “Kid On My Shoulders.” “While We Go Dancing” is another energetic highlight, and the tribal beat of “I Used To Complain But Now I Don’t” extends the White Rabbits’ party music repertoire.