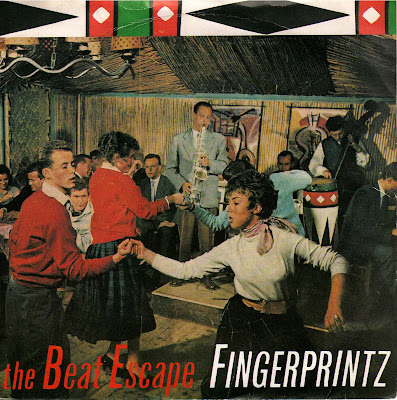 Before moving on to “The Beat Escape,” here are a few things taking place in Chicago tonight.

Factory Theater’s launch party for the return of White Trash Wedding And A Funeral is being held at Chief O’Neill’s Pub (no relation to Jimme) from 6:00 to 10:00 PM. It’s free to get in, but for a $5 admission fee, patrons can compete to be named Miss White Trash. The winner gets to wear a tiara and sash for a ‘glamour shot’ that will remain on display at the box office for the duration of the play. Factory Theater is celebrating its 20th season.

Also tonight, the politically charged band, Vortis, which includes veteran rock critic and Sound Opinions co-host Jim DeRogatis on drums, is performing at Ultra Lounge, along with trash band, The Funs, and the one-woman art performance of Lam! Lam! Admission ranges from $6 to $8, show time is 9:00 PM.

From 1979 through 1981, Fingerprintz embodied the motto, If At First You Don’t Succeed, Try, Try Again. Led by the talented and seemingly macabre lead vocalist Jimme O’Neill, the UK band went punk on its debut, The Very Dab; moved on to a more catchy pop approach for Distinguishing Marks; and aimed for dance clubs with Beat Noir. Musically, Fingerprintz succeeded at each genre they tried, but in terms of commercial appeal, they flopped. O’Neill, along with guitarist Cha Burnz, would find a bit more success with The Silencers, but for the most part, he remains one of rock’s unsung anti-heroes.

For years, Fingerprintz was one of those unfortunate acts (like Chicago’s punk pioneers, Bohemia) whose songs never made it on to a CD. But in researching this piece, I found that it’s now possible to download Fingerprintz songs from their Last.FM page. I highly recommend checking that out.

“The Beat Escape” was taken from the 1981 album, Beat Noir, which found Fingerprintz lead vocalist-songwriter Jimme O’Neill setting his disturbing imagery to irresistible synth beats. This song is a relatively harmless invitation to party, with an exotic arrangement and cryptic lyrics. O”Neill begins with a “crazy enfant” with a “nomad heart” whose gyrations resemble a whirling dervish. The action takes on global proportions, with lyrics like, “Mad dance/crazy round the world/Crazy boys and girls.” There are also references to naked city civil servants and an approaching carnival, but that’s pretty much typical Fingerprintz fare. Perhaps most importantly, “The Beat Escape” is an energetic and catchy song, augmented by horns.

The non-album B-Side, “Disorient Express,” is an instrumental, except for some ominous mumbling about midway through. It’s dark and melodic, and a worthy addition to the Fingerprintz oeuvre.