Book Review: The Hollies Through The Years 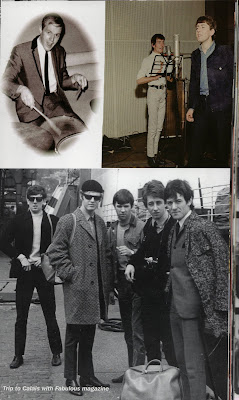 He’s hardly a household name in America, but among professional musicians, Bobby Elliott has been regarded as one of rock and roll’s best drummers for over four decades. Currently, Elliott and guitarist Tony Hicks are the only remaining original members of The Hollies, who continue to tour and record CDs. Along with items like shirts and tour books, the band’s official website offers a book that Elliott assembled from his personal archives, called The Hollies Through The Years.

It’s not a massive, artful effort like Graham Nash’s hardbound Eye To Eye. In fact, it has the same format as the tour books, and pretty much the only words you’ll see are on reproductions of radio surveys or articles about the band. There’s also a copy of a receipt from The Toggery, which apparently was quite the place for trendy musicians to buy clothes in the mid-1960s. Other artifacts include a postcard from Elliott to his parents while he as on tour in California; a flyer for an appearance at the Imperial Ballroom, and a rehearsal schedule for the Hullabaloo TV show, which lists times for The Hollies, Frankie Avalon, Nancy Sinatra, The Ronettes, and The Yardbirds.

Mostly though, Through The Years is a collection of rare photographs of the Hollies, including some of the musicians long before they were in the band. Hicks looks like he could be no more than 13 in a vintage snapshot from when he was with a seven-piece outfit called Les Skifflettes, and there are pics of groups that spawned members of Hollies, like The Guytones, Shane Fenton & The Fentones, and The Dolphins. There’s also a shot of a very young Elliott pounding the skins back in 1958.

There are plenty of visual treasures for fans of the original British Invasion, like stills from The Hollies’ appearances on U.K. shows like Thank Your Lucky Stars, Ready Steady Go! and Top Of The Pops. There aren’t very many other famous 1960s stars included, other than a grainy B&W shot of Dave Clark watching The Hollies from backstage, and a few pictures of band members with the ultimate 1960s dream girl, Marianne Faithful. (“Carrie Anne” was rumored to be about her.) As photographer Henry Diltz pointed out in his book, California Dreaming, The Hollies loved posing for pictures. There are dozens of publicity shots included in Through The Years, as well as photos that show the band working in the recording studio and performing on stage.

The Hollies Through The Years would have been even better with some commentary from Elliott, but his reflections on performing with the band can be found within the liner notes on The Hollies All The Hits & More record.