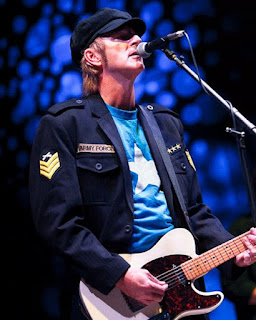 Lonnie Flowers has a new album coming out this Friday.

Last Friday’s Slumgullion was delayed due to holiday events, starting with my morning trek to Reckless Records in downtown Chicago for Black Friday Record Store Day and ending with Thanksgiving dinner with my siblings and in-laws. My side of the family has celebrated Thanksgiving on the Friday afterward for decades now. It makes it easier for everyone who hang around longer.

The employees at the downtown Reckless Records were once efficient and friendly in handling customers’ lists and ringing up our vinyl treasures. They didn’t have the boxed set of U.K. Singles by The Pretenders or the Peter Holsapple Combo Christmas single I wanted, but those issues were beyond their control. I was able to buy the other releases on my list—the “Three” 12-inch single by U2, “Cruel To Be Kind” by Nick Lowe; “Holiday-ish” by The Regrettes; “Arthur” by The Kinks; and “Gimme Some Truth” by Cheap Trick.

Lannie Flowers, a widely recognized master of power pop, has a new album titled Home coming out this Friday. Katrina And The Waves have a new album on the way as well.

As her recently released tribute album to The Police picks up steam, Juliana Hatfield is extending her 2020 tour. It still kicks off at SPACE in Evanston, IL and includes stops in Dallas, Los Angeles, San Francisco, Portland, Seattle, Milwaukee, and Brooklyn. Juliana Hatfield Sings The Police is a fun album brimming with raw energy that’s definitely worth picking up. It’s available through American Laundromat Records.

Chicago-based indie rock band Fort Frances has a show coming up next Thursday at Schubas on Southport Avenue. The Waco Brothers will be at that same venue on December 27.

Kelly Hogan and Andrew Sa, Phil Angotti, Paul Cebar, The Amazing Heebies, Dave Drazin, and Nora O’Connor will be among the twelve locals acts covering famous country music and rock and roll stars this coming Saturday, December 7 at FitzGerald’s in Berwyn. The celebration marks the official release of the 2020 edition of Chris and Heather’s Country Calendar. As in years past, the calendar will feature really cool illustrations of musicians. Admission to the Country Calendar Show is $25, the music starts at 8:00 p.m.

Critical acclaimed artist Erika Iris will be featuring some of her unique portraits of celebrities and rock stars—she uses cassette tape and videotape—at the Cheap Kiss Records sponsored Vinyl Records Warehouse Sale this Saturday from 8:00 a.m. to 12:00 p.m. Record collectors will find a massive selection of just about every imaginable genre at the sale, which will be located at 604 Albion Avenue in Schaumburg.

The Toy Con Charity Toy Show will be held this Sunday, December 8 at the Bridgeview Community Center in Bridgeview, IL . There will be over 60 dealers selling action figures, dolls, comics, and collectibles, and all proceeds go to the Pediatric Oncology Treasure Chest Foundation. Toy donations will be accepted.
Posted by Terry Flamm at 8:58 PM