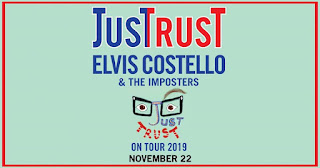 Chicago area fans will have an opportunity to catch one of punk’s first and most influential acts when Elvis Costello and The Imposters bring their Just Trust tour to the Chicago Theatre this Friday night.

Sounding just like “Buddy Holly.” Three local bands have a 25th anniversary celebration planned for a pair of beloved power pop albums coming up this Friday night at Montrose Saloon. The Bishop’s Daredevil Stunt Club, who have released some impressive albums themselves, along with grunge/riot grrl quartet LovePunch and the coed power pop quintet Dirty Blond, will be performing songs from Twice Removed by Sloan and Blue by Weezer. The music starts at 8:30 and it will probably a perfect night for wearing a sweater. Montrose Saloon is located at 2933 W. Montrose Avenue.

Congratulations to Sir Paul McCartney on being chosen as the headline act at the 50th Annual Glastonbury Festival coming up in England on June 27, 2020. Diana Ross has also signed on to perform, and several other acts will be announced soon. Loyal fans of the festival can now purchase the Glastonbury 50 book by Micael Eavis and Emily Eavis via Rough Trade, Waterstones, WHSmith, and Book Depository.

It’ll be Automatic Baby all over again. The Chicago-based U2 tribute band Without U2 joins forces with New York’s Dead Letter Office R.E.M. tribute band this Saturday at Martyrs’ on Lincoln Avenue. That’s a lot of awesome music for one evening. The show starts at 9:00 p.m.

The Hey Nonny venue in Arlington Heights has booked another first rate act from the Chicago music scene. Steve Dawson and Diane Christiansen of Dolly Varden are scheduled for a gig on January 17. Singer-guitarist Chris Rawlins Cialdella will be their special guest.

Last Thursday at the Reckless Records on Madison, I bought a copy of a booklet titled Fireside Fury On Fullerton Stories - Chicago’s D.I.Y. Punk Venue - A Retrospective. It features contributions from members of the bands The Methadones, Boris The Sprinkler, The Bollweevils, No Empathy, and Oblivion. Their memories of performing at Fireside Bowl in the 1990s are fascinating, and the booklet is only $3.00.