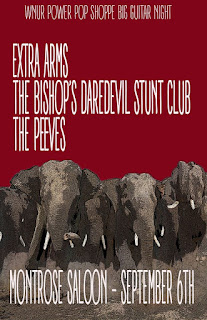 So . . . Welcome to September. A particularly hectic holiday and work schedule kept me from posting anything earlier this week.

Depending on what time you read this, there might still be time to check out Big Guitar Night at Montrose Saloon tonight. It’s the latest triple bill live performance presented by Kirk Fox, the host of WNUR’s Power Pop Shoppe radio program. This time, the bands are The Peeves, The Bishop’s Daredevil Stunt Club, and Extra Arms. The music starts at 8:00 p.m.

The Stereogum website is reporting that R.E.M. will be releasing a deluxe reissue box set of Monster to mark the 25 Anniversary of the critically acclaimed and highly successful album.

Tickets went on sale today for Andrew Bird at Fourth Presbyterian Church of Chicago on December 9 through 12; Cherie Currie from The Runaways and Brie Darling from Fanny at City Winery Chicago on November 25; Empty Pockets at SPACE on December 6; Anne Heaton at SPACE on December 22; the John Prine tribute band Illegal Smiles at SPACE on December 26; and Over The Rhine at the Old Town School Of Folk Music on December 7. The above listings were taken from the Early Warnings page of this week’s Reader. You can pick up a copy at various locations around downtown Chicago and the north side.

Artist/art critic Robin Dluzen will celebrate her birthday tomorrow with a one-day exhibition titled Something Olden and Golden at ORBIT. In her Artist Statement, Dluzen notes that for several years she’s been inspired by the labor history of women in her family. Several pieces are based on drawings her mother did when Robin was growing up. Something Olden and Golden will be open from 5:00 to 10:00 p.m. ORBIT is located at 1350 W. Erie.

You were great. Who are you? K.T. Tunstall was a surprise addition (at least to my knowledge) to last Saturday’s Squeeze concert at the Chicago Theatre. Taking the stage unannounced and without introducing herself, Tunstall nevertheless easily won over the crowd with her friendly demeanor, distinctive vocals, and energetic guitar strumming. She did mention coming from Scotland at the outset, which was a major clue, but I must confess I wasn’t absolutely positive until Tunstall launched into her major hit “Big Black Horse And The Cherry Tree.” Much of the crowd was on its feet by the time she finished her short set, which also included the rousing “Suddenly I See.”

Squeeze was magnificent, delivering what Tunstall had said they would: a master class in songwriting. That applied to new material from its 2018 album The Knowledge as well as the early classics like “Pulling Mussels (From The Shell)” and “Up The Junction.” Founding members Glenn Tilbrook and Chris Difford stood front and center playing their guitars, and frequently joining together on vocals. Tilbrook provided most of the guitar firepower as Squeeze unleashed high-powered versions of  “In Quintessence,” “Third Rail,” and “Hourglass.” The more soulful “Tempted” and “Black Coffee In Bed” were also among the highlights.

The idea of Chrissie Hynde sneaking up on you is a bit scary, but in this case, she’s doing it with a new album. As noted in the September issue of the Illinois Entertainer, Hynde’s second solo effort, Valve Bone Woe, came out today. We also got Lost Girls from Bat For Lashes; Rubberband from Mile Davis; and Free from Iggy Pop. September 13 brings Beneath The Eyrie from The Pixies; September 20 brings All The Feels from Fitz And The Tantrums and Why Me? Why Not. from Liam Gallagher; and Hey, I’m Just Like You from Tegan and Sara drops on September 27.

A week from tonight, Great Moments In Vinyl, a Chicago band with a rotating lineup of musicians, with join forces with the Mosaic Soul vocal ensemble to perform the Paul Simon album Graceland at the Beverly Arts Center on the city’s south side.

Fly me to KAABOO and let me play among the stars. The Bangles, Squeeze, Little Steven and The Disciples Of Soul, Silverspun Pickups, The Cult, Southside Johnny and The Asbury Jukes, and Toots and The Maytals are among the acts scheduled to perform at the KAABOO entertainment and arts experience (the organizers prefer that term to festival) at the Del Mar Racetrack in San Diego next weekend.

Mercury Theater’s production of Spamalot continues its run through November 3. The production is being directed by L. Walter Stearns; Eugene Dizon is the Musical Director. Performances will be at 8:00 p.m. Wednesday through Saturday each week, with an additional show at 3:00 p.m. on Saturday, and a 3:00 p.m. show on Sunday.
Posted by Terry Flamm at 8:38 PM