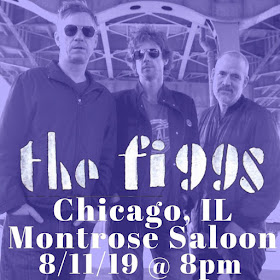 Indie rock veterans The Figgs have a gig coming up this Sunday night at Montrose Saloon on  Chicago’s north side. Adept at crafting catchy, guitar-driven songs like “On The Side,” “Your Smile Is A Deadly Thing,” and “Wealthy Women,” the Saratoga, NY trio got its start back in 1987. The Figgs have recorded 13 albums and are about to wrap up their latest.

The Sonic Assault EP vocalist-guitarist Johnny Weathers and former Sex Pistols drummer Paul Cook released last year will soon be available as a limited edition, numbered vinyl-only picture disc. “Man From The Orleans,” the hard-hitting opening track on that EP, was one of the very best songs of 2018.

Give the drummer some pages. Goldmine magazine recently posted on Instagram about a new book by Mike Edison titled Sympathy For Drummer: Why Charlie Watts Matters. It’s due out in October. Edison is the former editor/publisher of High Times magazine, and was a drummer with Sonic Youth, Sound Garden, and The Ramones, so he certainly seems qualified to cover The Rolling Stones.

Former Smiths guitarist Johnny Marr will release a new single titled “The Bright Parade” this Thursday. Marr’s albums The Messenger, Playland, and Call The Comet all drew high praise here on Broken Hearted Toy, and he’s also collaborated with Modest Mouse, The Pretenders, and The Cribs.
Terry Flamm at 8:52 PM