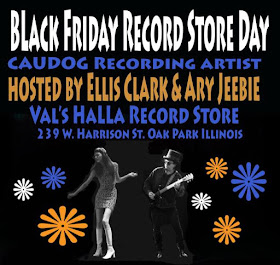 We’ve arrived at the most appreciated Wednesday night in America; the gateway to a four-day weekend anchored by Thanksgiving. Here are a few suggestions on how to spend some of that extra leisure time.

Depending on when you see this, there might still be time to catch The Safes hosting their 15th Annual Black Wednesday Show at Schubas on Chicago’s north side. The Safes, whose albums have garnered praise here on Broken Hearted Toy, will be joined by The Differents, Baby Money, The Down Payments, and The Marcatos. You could also pick up a copy of The Safes’ new Juliana Hatfield tribute seven-inch single.

Chicago TARDIS takes place this Friday through Sunday at the Westin Lombard Yorktown Center. Billed as “The Midwest’s Largest Doctor Who Event,” it will feature Pearl Mackie, who did a fantastic job as The Doctor’s companion Bill Potts; Tony Curran, who portrayed Vincent Van Gogh on an episode; Nicholas Briggs, the voice of the Daleks, Cybermen, and Ice Warriors; and other celebrity guests. Note: according to the Chicago TARDIS website, actress Jenna Coleman, who played Clara Oswald, has had to cancel her appearance due to filming obligations.

Dave Drazin, a founding member of the Famous In The Future comedy group along with Lake Sirmon, Frank Carr, and myself, will be providing piano accompaniment for Buster Keaton’s 1927 classic silent film The General this Saturday at the Gene Siskel Film Center downtown. He does this sort of thing on a regular basis and is quite good at it.

Sunshine Boys, the recently formed trio of music scene vets Dag Juhlin, Freda Love Jones, and Jacqueline Schimmel, have a vinyl release show this Saturday night at Montrose Saloon on Chicago’s north side. Their debut album Blue Music, stands as one of the year’s best releases. Gerald Dowd is also on the bill.