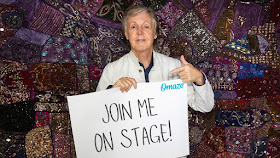 Maybe I’m Omazed. Two lucky Paul McCartney fans could win tickets to see him perform at the Echo Arena in Liverpool, as well as free airfare, hotel accommodations, and a chance to join him onstage. It’s all part of a current campaign on the Omaze fundraising site to support the not-for-profit Meat Free Monday campaign, which Paul and his daughters Mary and Stella started in 2009. Omaze specializes in matching popular celebrities to worthwhile causes.

Depending on when you read this tonight, you might still have time to catch EXPO ’76 at Mac’s On Slade in Palatine; The Sting Police tribute act at the Metropolis Performing Arts Centre in Arlington Heights; Big Brother’s Vinyl at Countryside Saloon in Des Plaines; the WNUR Showcase at Montrose Saloon in Chicago featuring The Idea, Love Punch and The Dry Look; or The Vanessa Davis Band at FitzGerald’s in Berwyn.

Tickets went on sale today for Frank Orrall from Poi Dog Pondering at SPACE on November 16; Meshell Ndegeocello at Thalia Hall on November 16; Flat Five at SPACE on February 14; celtic band Cherish The Ladies at The Old Town School Of Folk Music on March 24; Coathangers at Empty Bottle on April 9; Billy Bragg at Lincoln Hall on April 25 – 27; and Dido at The Vic on June 13.

Shiny and Oh So Bright . . ., the latest release from The Smashing Pumpkins, arrived today. Next Friday brings The Bela Session by Bauhaus; and on November 30, we’ll see Bitter-Sweet from Bryan Ferry and WARM from Jeff Tweedy.

Long-time Lincoln Park store The Book Cellar will host An Evening With Jeff Tweedy at The Music Box on Southport this Sunday at 7:00 p.m. Tweedy, well-known frontman for Wilco, will be discussing his new memoir Let’s Go (So We Can Get Back).

Black Friday Record Store Day is next Friday. Do you know where your wish list is?

The Safes are holding their 15th Annual Black Wednesday Show at Schubas, so be sure to have all your Thanksgiving meal preparation done early. This year, they’ll be joined by The Differents, Baby Money, The Down Payments, and The Marcatos.

David Crosby has a gig coming up on Monday, November 19 at the North Shore Center For The Performing Arts in Skokie.

Second City is already known for live shows that have launched the careers of several big time comic performers, as well as for its training facilities. It’s now also the home of the Harold Ramis Film School, which is being billed as The World’s Only Film School Dedicated To Comedy. The program is divided into three segments—Comedy Theory, Storytelling, and Filmmaking. Anyone interested in enrolling can contact Second City at admissions@secondcity.com.

Congratulations to long-time Chicago Tribune theater critic Chris Jones on his brand new book Rise Up! Broadway and American Society from Angels in America to Hamilton. Last Sunday’s edition of the Chicago Tribune had an extensive excerpt describing Barack and Michelle Obama attending a Broadway production of Lorraine Hansberry’s A Raisin in the Sun back in 2014.

The Sunshine Boys will celebrate the vinyl release of their superb album Blue Music with a show on November 24 at Montrose Saloon.

The 20th Annual Animation Show Of Shows comes to the Gene Siskel Film for a two-week run starting on December 14.
Terry Flamm at 8:10 PM