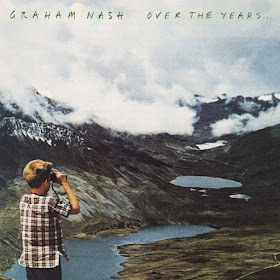 The first disc of Over The Years . . . offers 15 classic songs recorded by Graham Nash throughout his post-Hollies career. “Our House,” “Wasted On The Way,” and “Teach Your Children” represent his Crosby, Stills, Nash and sometimes Young tenure, while “Immigration Man”is a Crosby/Nash highlight. The solo material reaches back to “Military Madness” from his Songs For Beginners solo debut up to “Myself At Last” from his 2016 effort This Path Tonight. But the real treasure for Nash fans can be found on disc two, which uncovers several previously unreleased demos.

For rock and roll archaeologists, the major find here is a demo of “Marrakesh Express” Nash recorded for The Hollies back in 1968. It’s easy to recognize the song’s exotic charms even via this bare-bones arrangement, and the band’s inexplicable rejection of it helped push Nash toward his new friends in America. The simple beauty of Nash’s songwriting is also evident as his sings and strums an acoustic guitar on “Simple Man,” “Right Between The Eyes,” and the Everly Brothers flavored “You’ll Never Be The Same.”

A stark rendition of “Chicago” featuring Nash alone at his piano makes it an even more emphatic call to action that the 1971 studio version. “Wind On The Water,” originally augmented with Crosby’s gorgeous harmonies, is still impressive in this earlier solo take. “Wasted On The Way” is the only track on Disc 2 with additional vocals, as Nash joins Timothy B. Schmidt of Poco and The Eagles fame and Stephen Stills on this heartfelt plea to make the most of life.
Terry Flamm at 8:54 PM