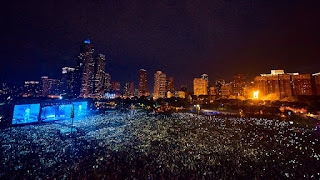 Let me extend a Broken Hearted Toy welcome to everyone who’s in Chicago for the annual Lollapalooza festival in Grant Park. I didn’t see any copies of Innerview at the downtown Reckless Records this time around. The indie publication usually puts out an extensive guide to the festival. WXRT 93.1FM  will have live coverage and interviews from throughout the weekend. If you happen to be in town and want to drop by, forget it. Lollapalooza has been sold out for months.

The Baseball Project, a national pastime related band composed of music veterans, including Scott McCaughey from The Minus Five and Young Fresh Fellows; Mike Mills and Peter Buck from R.E.M.; Steve Wynn from The Dream Syndicate; and Linda Pitmon from The Miracle 3, will be performing at SPACE in Evanston tomorrow night. Sunshine Boys, back in action after some medical issues kept them sidelined for awhile, are the opening act. By the way, “Only A Million Miles,” from Sunshine Boys’ debut Blue Music, remains a serious contender for best song of 2018.

Tickets went on sale today for Courtney Barnett and Waxahatchie at The Riviera Theatre on October 9, and for Lydia Loveless at SPACE on September 24.

The 24th Annual Black Harvest Film Festival kicks off tomorrow at the Gene Siskel Film Center and will run through August 29.

The Bookends, the 1960s-inspired garage rock duo of bassist-vocalist Sharon Lee and guitarist-vocalist Karen Lynn, have just released their debut album Far Away But Around. It’s available on the Dead Pulse website.

The unpredictable and always fun New Duncan Imperials have a rare live gig next Friday, August 10 at FitzGerald’s in Berwyn.

Shemekia Copeland’s new album America’s Child, which long-time Chicago Tribune music critic Howard Reich praised in a full-length article this past Wednesday, is now available. Reich noted that Copeland was “hellbent on sending a message,” particularly on the track “Ain’t Got Time For Hate.”

Over The Rhine, the alt rock/Americana band led by Linford Detweiler and Karin Bergquist, is based in Ohio but travels to Chicago on a regular basis. They’ll be at City Winery next Sunday, August 14. Moody Blues vocalist Justin Hayward will be at City Winery on August 26, and on August 27, The Lotus Kings will perform their Santana Tribute.

Todd Rundgren will join forces with the Chicago Sinfonietta for A Night Of Harmony II on September 8 at House Of Blues. The concert is a benefit for Rundgren’s Spirit Of Harmony Foundation, which helps provide music education for youths.

Those of us who were at Little Steven’s Underground Garage showcase at Durty Nellie’s in Palatine a number of years ago still remember how much fun it was to watch the garage rock band The Woggles perform. (The Zombies, Mooney Suzuki, The Gore Gore Girls, and Catfish Haven were also on that bill.) The Woggles will be at Reggies on State Street on September 1, along with Barrence Whitfield and The Savages and Baby Money and The Down Payments.

Jay Goeppner and his Backdated Band will be performing a John Lennon Tribute on August 14 at the 210 Live club in Highwood. 210 also has a JB Ritchie Benefit concert coming up on August 19.

Toots And The Maytals have a gig coming up at Thalia Hall next Wednesday, August 8.

The Fest For Beatles Fans returns to the Chicago area next weekend, at the Hyatt Regency O’Hare in Rosemont. Guests include Peter Asher of Peter and Gordon and Jeremy Clyde of Chad and Jeremy; Roy Orbison, Jr.; Billy J. Kramer; producer Jack Douglas, Beatles hairdresser Leslie Cavebdish, and Beatles engineer Geoff Emerick. WXRT DJ Terri Hemmert will once again serves as Master Of Ceremonies. The Weeklings; Liverpool; Phil Angotti and Friends; and Scott Erickson will be performing a The Fest.

Looking ahead, Wizard World Chicago Comic Con will be at the Donald Stephens Center in Rosemont August 23 - 26, and YippieFest, a celebration of theatre, stand-up comedy, performance art, film, and live music will mark its second year at Prop Thtr on the weekend of August 17-19.
Posted by Terry Flamm at 8:31 PM