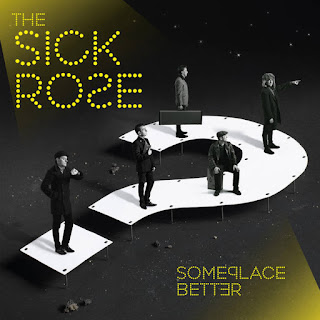 The Sick Rose is based in Torino, Italy, but guitarist-backup vocalist Georgio Cappellaro spent the better part of the 1990s in Chicago and performed with a band here called The Drapes. Before returning to Italy, he must have packed his suitcases with loads of Midwestern power pop know-how. While it’s unclear whether the band’s name comes from William Blake’s 1794 poem, The Sick Rose’s recently released seventh album Someplace Better could serve as a blueprint for how to best use the power pop genre.

Produced by Ken Stringfellow of The Posies, the material concentrates on romantic relationships and features Luca Re’s powerful singing and the band’s spirited backing vocals set to catchy arrangements. “How To Be Your Friend” and “Childhood Dreams” are guitar-driven tracks that evoke the earliest power pop bands like The Records and The Raspberries. On “Blame It On Me,” The Sick Rose crafts an achingly beautiful melody without sacrificing a bit of energy.

“Nobody” is pure 1960s-fueled entertainment; mixing garage rock with a hint of soul in a high-speed swirl of guitars and keyboards. It’s easy to imagine it being performed on a show like Shindig or Hullaballoo, with a bevy of dancers around the band. “Fortune And Fame” and “Frustrated” likewise explore garage rock territory with fun results, while the title track is peppy instrumental that sounds like it could be a TV theme song.
Posted by Terry Flamm at 5:50 PM