It Came From Steve Dahl’s Garage 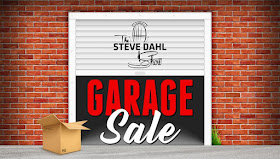 Like a lot of us who’ve accumulated rock and roll memorabilia, WLS-AM radio host Steve Dahl is looking to get rid of some stuff. What sets Dahl apart is that his immense popularity stretches back beyond the earliest days of juggernaut hard rock station The Loop, and he’s had access to all sorts of promo material. He’s interviewed famous rock musicians and performed parodies with his own group. Plus, as noted in a recent Chicago Tribune article by Jennifer Johnson, money from the sales at his Garage Sale this Saturday at the Rivers Casino in Des Plaines will benefit Beds Plus, a charity organization dedicated to helping homeless people.

Dahl explained to Johnson that he’ll be selling vintage vinyl, CDs, artwork, sports memorabilia, old studio equipment, and “some personal items.” Back in 1983, I heard from friends that Dahl did a phone interview with The Hollies in advance of their reunion tour (Graham Nash was even involved) performance at ChicagoFest. The possibility that he might be selling items from that tour brings back memories of when I was a kid and WLS—a Top 40 station in those days—was giving away Christmas cards from rock stars. They had one from The Hollies but I wasn’t the lucky caller who snagged it. Even with no Hollies items involved, it should be fascinating to discover what Dahl has to offer.

Another incentive is that musician Dag Juhlin, who’s a regular on Dahl’s current afternoon show, will be performing from noon to 2:00 p.m. with his extremely entertaining covers band EXPO ’76. Juhlin’s extensive resume also includes Poi Dog Pondering, The Slugs, and the recently formed Sunshine Boys. The garage sale runs from 10:30 a.m. to 4:00 p.m. in the Rivers Casino’s north lot at 3000 S. River Road. Admission is free but you have to be older than 21 to attend.
Terry Flamm at 9:24 PM