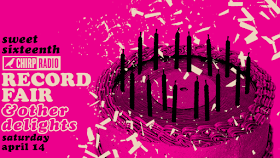 The annual CHIRP Record Fair and Other Delights, always one of the best things about April in Chicago, takes place tomorrow at the Local 130 Plumbers Union Hall at 1340 W. Washington. An amazing selection of records, CDs, DVDs, posters, books, and other rock and roll related merchandise will on sale from vendors; and the entertainment includes live music and DJs. Admission from 10:00 a.m. to 6:00 p.m. is $8, and early admission from 8:00 a.m. to 10:00 a.m. costs $25. The first 500 attendees will get a free tote bag that includes the download code for the CHIRP Record Fair Local Label Sampler.

Tickets went on sale today for the premiere of the Andrew Bird film Blue Heart at Thalia Hall on May 9. Other shows now on sale include Justin Hayward of The Moody Blues at City Winery Chicago on August 26; Dave Alvin of The Blasters and Americana artist Jimmie Dale Gilmore at The Old Town School Of Folk Music on September 8; Rufus Wainwright at The Vic on November 20; and the Willy Porter Band at City Winery Chicago on September 28.

Phil Angotti, with special guest Cliff Johnson, will be performing his monthly Beatle Brunch this Sunday from noon to 4:00 p.m. at the Reclaimed Bar and Restaurant. Both of these guys are veterans of the Chicago power pop scene, so they practically have 1960s hits flowing through their veins. In addition to his solo work and tribute shows around town, Angotti was a member of the band The Idea. Johnson currently performs with The Raine and is best known as the lead vocalist for Off Broadway. Reclaimed Bar and Restaurant is located at 3655 N. Western Avenue.

Later that same day, you can catch Tommi Zender, with special guest Steve Dawson, at Wishbone North from 7:00 p.m. to 9:00 p.m. Zender is a veteran of the Chicago scene and a frequent participant in tribute shows; Dawnson is a solo artist as well as a member of the critically acclaimed alt rock/Americana band Dolly Varden.

I was happy to see Jeff Elbel’s article in today’s Chicago Sun-Times about The Smithereens performing on April 19 at The Genesee Theatre in Waukegan. Robin Wilson from The Gin Blossoms will be serving as lead vocalist. It was no doubt a difficult decision to continue on after Pat DiNizio passed away last December, but I would agree with what a lot of fans are saying, which is The Smithereens’ power pop music should continue to be performed live. The Smithereens will be opening for Dave Davies of The Kinks at The Genesee.

Elbel also mentioned the new Covers album being released by The Smithereens, which features several cover versions recorded by DiNizio and the band over the years.

Head Over Heels, the new musical based on songs by The Go-Go’s, began previews earlier this week at the Curran in San Francisco. Tickets for Broadway previews, which starts in New York on June 23, are now on sale. Here’s hoping Head Over Heels comes to Chicago at some point.

The Asian American Showcase runs through April 18 at the Gene Siskel Film Center.

A Funny Thing Happened On The Way To The Punchline, an exhibit on comics, runs through April 21 at the Chicago Literary Alliance.

Colin Blunstone of The Zombies will embark on a U.K. tour before rejoining the band later this year for another tour. According to a post on the Essentially Pop website, Blunstone is also busy recording his next solo album.

The Posies’ 30th Anniversary Tour now includes dates in the U.K. (It arrives at Park West in Chicago, with Material Reissue as the opening act, on June 23.)

Four very good songs by The Valley Downs, one of Chicago’s best but not altogether busy bands, can now be heard on Spotify.

Art Encounter, a nonprofit art education organization, is hosting an event to honor gallerist William Lieberman on Sunday, May 6 at the Evanston Women’s Club.

The Chicago Toy Show returns to the Kane County Fairgrounds in St. Charles on April 22 for the first of its two events there in 2018. In addition to collectibles, action figures, Matchbox cars, and Star Wars treasures, the show also offers a fair amount rock and roll memorabilia. There are vendors offering vintage publcations, records, CDs, and even music-related toys. I’ve purchased a car imprinted with the Beatles Revolver allbum cover, and a semi trailer showing Cheap Trick. Admission The Toy Show is &10, hours are from 8 a.m. to 3 p.m.

The Real Pretenders, a Pretenders tribute takes place at FitzGerald’s in Berwyn on April 19.

Flirting With Time: A Tribute To Neil Young takes place at FitzGerald’s in Berwyn on April 20.
The reunited L7 at performs at Metro on April 20.

There will be a screening of the film Concert For George – Celebrating the Life and Music of George Harrison on May 16 at the Music Box. The 2002 concert brought together Paul McCartney, Ringo Starr, Eric Clapton, Billy Preston, Ravi Shankar, Tom Petty, Monty Python, and other to honor Harrison.
Terry Flamm at 10:11 PM