I’d Be Quite Prepared For That Eventuality 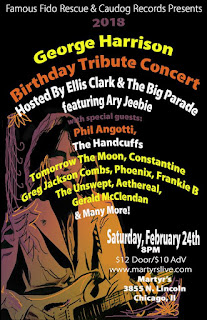 This Saturday night, several Chicago area musicians will gather at Martyrs’ on Lincoln Avenue for the second annual George Harrison Birthday Tribute Concert hosted by Ellis Clark and The Big Parade with Ary Jeebie. It will be an impressive mix of acts returning from last year and some interesting newcomers. At the 2017 event, the selection of Harrison material performed ranged from hit singles to deep tracks and rarities.

Ellis Clark and Ary Paloma Jeebie will likely perform together, with their respective bands, and help out other groups. Part of the fun last year was seeing musicians from different groups joining together on stage. Clark was a founding member of Epicycle, one of Chicago’s first punk acts, as well as Social Act. He’s also a successful solo recording artist and producer. Ary Jeebie is the lead vocalist for Amazing Heeby Jeebies, a the garage/rockabilly band that just released its latest album.

Returning performers include singer-guitarist Phil Angotti, who released the compelling acoustic-based Such Stories album last year; and The Handcuffs, an indie band led by vocalist-guitarist Chloe F. Orwell and drummer Brad Elvis that just wrapped up recording its fourth album. The psyche quintet Aethereal not only played last year’s George Harrison tribute, they were part of the Kaleidoscope Eye Festival held at Live Wire.

The new participants include sci-fi techno rock band Tomorrow The Moon, which is led by vocalist-guitarist Steve Gerlach; and psyche rockers Constantine, whose flower power inspired arrangements tap into elements of jazz. British imports The Unswept are long-time favorites at International Pop Overthrow - Chicago. Greg Jackson Combs; Phoenix; Frankie B; Gerald McClendan; and other acts will also be performing.

The George Harrison Birthday Tribute Concert will include a silent art auction to benefit Famous Fido Rescue. Admission is $12 at the door, he music starts at 8:00 pm.; with a pre-show with the Sandalwood Sitar Ensemble at 7:00 p.m.
Posted by Terry Flamm at 9:18 PM