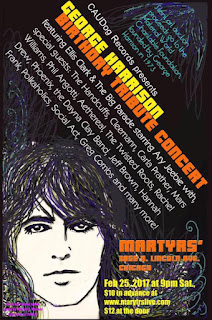 This coming Friday, February 24th would have been George Harrison’s 74th birthday and Chicago area Beatles fans will be able to have a fun time in his honor a day later at Martyrs’ on Lincoln Avenue. The George Harrison Birthday Tribute Concert will be hosted on Saturday night by Ellis Clark and The Big Parade with guest Ary Paloma Jeebie from the garage/rockabilly band Amazing Heeby Jeebies. A founding member of Epicycle and Social Act, Clark is also a solo recording artist and producer.

Other performers include Mars Williams from The Psychedelic Furs; Carla Prather of Poi Dog Pondering; and singer guitarist Phil Angotti, who’s on the verge of releasing his latest solo effort. The Handcuffs, the coed indie band that’s led by vocalist-guitarist Chloe F. Orwell and drummer Brad Elvis (and once included Clark as a member), will also be on hand. Some of the other bands are Social Act, Aethereal, Rachel Drew, and The Polkaholics. There will also be a Silent Art Auction.

See the George Harrison Birthday Tribute Concert Facebook page for a full list of the performers. Admission is $12 at the door, and proceeds will go to The Material World Charitable Foundation, which was founded by George Harrison in 1973.
Terry Flamm at 10:57 PM