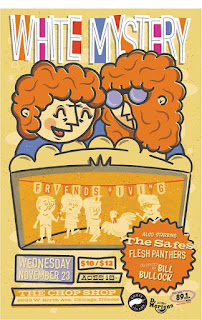 Just a reminder about some fun things taking place on Thanksgiving Eve.

The Safes, a band that has adroitly mixed hard-edged melodies and harmony vocals with punk exuberance on a series of releases, will hold their annual pre-Thanksgiving bash Friendsgiving
tomorrow night at Chop Shop on North Avenue. They’ll be joined by critically acclaimed siblings White Mystery. Flesh Panthers, who switched from their usual manic punk rock to a more atmospheric approach on their new Willows Weep album, will also be on the bill. Comedian Bill Bullock opens the show. The Safes will be performing live early tomorrow on Fox Morning News.

Also tomorrow night, Phil Angotti And Friends will be performing Paul McCartney’s Ram album at Reggie’s Chicago on State Street. Angotti has done his Ram tribute before, and has gained a good deal of expertise in honoring worthy artists in shows around Chicago. Mr. Blotto is also on the bill tomorrow night.

And moving on to a post-Thanksgiving event, you can wrap up your Black Friday adventures by dropping by FitzGerald’s in Berwyn and singing along with “Not Dead Yet!” when The Bad Examples are performing that night.
Terry Flamm at 10:17 PM