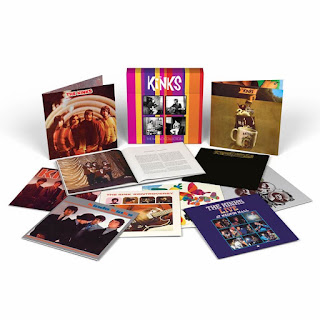 A hearty welcome to everyone who's visiting Chicago this weekend; whether it's for the Cubs/Dodgers National League Championship series, the Chicago Film Festival, or just to check out the city's multitude of cultural events and festivities.

Mono is going around. The Rolling Stones recently released their Mono box set; The Hollies re-released their 1960s Evolution and Butterfly albums on 180-gram vinyl in mono and stereo, and now The Kinks are getting in on the act. According to the Second Disc website, The Kinks – The Mono Collection—due in December—will offer 10 LPs on 180-gram vinyl, including the 1967 Live At Kelvin Hall. A 48-page book with rare photos is also part of the package.

Open House Chicago will offer tours of famous buildings in various neighborhoods tomorrow and Sunday. The behind-the-scenes opportunities include Zap Props in Bridgeport; The Forum in Bronzeville; the University Of Chicago Quadrangle Club in Hyde Park; the Elks National Memorial in Lincoln Park; Palette And Chisel Academy in the Gold Coast; the Athenaeum Theatre in Lakeview; the Northwestern University Charles Deering Library in Evanston; and the Portage Theater in Portage Park. Check the Open House Chicago website for the full list.

As the late Yogi Berra used to say, "It's deja vu all over again." WXRT morning DJ Lin Brehmer and news anchor Mary Dixon will be broadcasting live from Wrigley Field tomorrow, from 10:00 a.m. to 2:00 p.m. They did their show from the iconic baseball park last Friday when the Cubs opened their 2016 post-season run against the San Francisco Giants. The Cubs play the Los Angeles Dodgers tomorrow night.

"Just Your Fool," the first single from The Rolling Stones' upcoming album Blue And Lonesome suggests the band has successfully tapped into its blues roots.

Musician Steve Dawson, who has garnered critical acclaim as a member of the alt rock/country band Dolly Varden as well as for his solo career, will join writer Mark Caro in presenting Songs, Stories and Creative Sparks at SPACE in Evanston tomorrow afternoon. The 1:00 p.m. event will feature them discussing and reading from the new book they've written together, Take It To The Bridge: Unlocking The Great Songs Inside You.

It's only a week until the new Pretenders album Alone comes out via iTunes, in CD and LP formats, as well as in a signed CD/LP with litho print combination.

Just don't pawn it, babe. Congratulations to Bob Dylan on being awarded this year's Nobel Prize in Literature for "having created new poetic expression within the great American song tradition." In other rock star accolade news, Rod Stewart was knighted by Prince William at Buckingham Palace this past Tuesday.

Archie Powell and The Exports will be bringing fresh material with them when they play the Burlington bar in Lincoln Park on Monday, November 7. Personally, I hope the new songs are in the clever, power pop vein of their first few albums rather than the angst-filled hard rock of their last album Back In Black.

Theatre Nebula's production of The Rocky Horror Show opens tomorrow night at Cutting Hall and runs through October 29. If you catch a Metra train to Palatine, Cutting Hall is just a blocks away from the station. Pre-show dining options includes Durty Nellie's, Tap House Grill, and Emmett's Brewing Company.
Posted by Terry Flamm at 10:15 PM