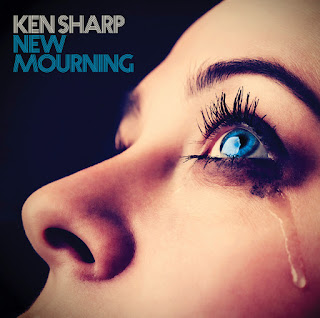 Rock and roll journalist Ken Sharp has more experience writing about musicians than being one, but he does release the occasional album. New Mourning is his fourth effort, and the first one since Sonic Crayons garnered critical acclaim nine years ago. Having thoroughly enjoyed all three volumes of Sharp’s Play On! Power Pop Heroes books, I expected New Mourning to overflow with jangling guitars and catchy arrangements. He takes a more cosmopolitan approach here; choosing the genres he must have felt best reflected the mood of his lyrics.

Structured as a song cycle, New Mourning seems to draw from Sharp’s life amidst the hustling west coast music scene. Most of his observations, such on the funk and glam rock “Crash And Burn,” the soulful “L.A. Can Be,” and the more rock-oriented “Mr. Know It All,” are critical of those who depend on drugs, plastic surgery or cutthroat business practices to survive. There are also songs about troubled relationships. Sharp proves he knows his way around rhythm and blues with the smooth ballad “Haunts Me” and the Motown beat of “Solid Ground.”

Occasionally, the arrangements sound at odds with the message, although that may have been the ironic effect Sharp wanted. “Bad News” has the verve of a Broadway musical as he rails against a deceitful woman. The put-downs in “Loser” are augmented by lushly layered vocals,and “The Worst” is set against a shimmering, orchestrated backdrop. Power pop fans will like the ringing guitars and infectious melody of “I Should Have Known Better,” and Sharp evokes The Who with his triumphant opener “Dynamite and Kerosene.”
Posted by Terry Flamm at 10:45 PM