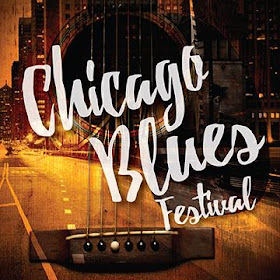 My wife Pam and I just returned from a week-long vacation in Washington, D.C. that included visits to most of the city's historical and cultural landmarks. I was barely back in time to prepare for one of Chicago’s best weekends of the year for art and entertainment.

Attending the Summer Suite 2016 Opening Reception at the Palette And Chisel Academy Of Fine Arts last night kept me from posting Slumgullion. So here’s a belated Broken Hearted Toy welcome to all the tourists, whether they’re in town for The Blues Festival, The Printers Row Lit Fest, Old Town Art Fair, Wells Street Art Fair, Spring Awakening, or America’s Cup.

Spring Awakening, now in its fifth year, has one more day of positive vibes at Addams/Medill Park.

The 32nd Annual Printers Row Lit Fest covers about three blocks in the south end of the Loop, and features well-known authors, fledgling writers, booksellers, and food vendors. I spoke with author Laura Quinn about her novel Punk Charming, which is set in the mid-1980s and is described as, “A Mixtape Of Spiked Hair, An Elusive Heir . . .  and Spiteful Stares.”

There’s also one day left to check out Remix Chicago in Logan Square on Milwaukee Avenue. In addition to line performers, this street fair offers recycled art, repurposing workshops, and a vintage market.

The Kickback and Freakwater are among the acts scheduled tomorrow for Ribfest Chicago on Lincoln/Irving Park/Damen.

It looks like the weather will be perfect for checking out all kinds of art at The Old Town Art Fair and The Wells Street Art Fair tomorrow.

Tickets are now on sale for An Evening With David Crosby at Thalia Hall on August 31 and Patti Smith and her Band performing Horses at the Riviera Theatre on December.

A few days before leaving for D.C., Pam and I saw The Zombies at The Arcada in St. Charles. Prior to the concert, we checked out an art fair just outside the venue, and spotted Zombies guitarist Tom Toomey wandering through the crowd. I bought a very cool print of Paul McCartney and John Lennon from artist Chris Drenth.

The annual baseball-themed Hot Stove Cool Music VIP Party takes place next Friday, June 17 at Metro. Liz Phair, Bernie Williams, JC Brooks and The Uptown Sound, Band Of Their Own, and Avid Dancer are slated to perform, along with and Peter Gammons and The Boston Hot Stove All Stars and Len Kasper and The Chicago Hot Stove All Stars. WXRT morning show host Lin Brehmer and Joel Murray from Mad Men will serve as Emcees.

Passion Pit and JD McPherson are the headliners for this year’s World’s Largest Block Party at Old St. Patrick’s Church on June 25. The event takes place from 5:30 to 11:00 PM at the UIC Festival Lot.
Terry Flamm at 10:59 PM