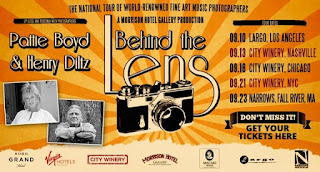 City Winery Chicago will present Behind The Lens with Photographers Henry Diltz and Pattie Boyd on September 16. This qualifies as an official event of A Hollies Summer In Chicago since Diltz did a fantastic photo shoot with The Hollies in 1966, and took the iconic cover shot for Crosby, Stills and Nash’s debut album. He also did the cover of The Doors’ Morrison Hotel, and has worked with some of rock’s biggest stars. Boyd wrote about her marriages to George Harrison and Eric Clapton in her book Wonderful Tonight, and is also a successful photographer. Tickets for the City Winery show range from $28 to $36.

There’s an opening reception for the Elgin ArtSpace Gallery's Fez Fest 2015 from 6:00 to 10: PM on September 11. The event, created by the people at Dangerous Brains, is being described as "an interactive celebration showcasing the Fez in art, history, and pop culture.” Which presumably, will include Doctor Who and Steely Dan.

As reported by Troy L. Smith on cleveland.com, The Rock And Roll Hall Of Fame will honor Graham Nash with an upcoming exhibit titled Graham Nash: Touching The Flame. Nash is expected to be on hand when the exhibit opens on October 17, and there’s a possibility he’ll perform. In addition to displaying some the singer-songwriter's photographs and memorabilia, Touching The Flame will focus on musicians like Buddy Holly and The Everly Brothers who influenced the music he created with The Hollies, Crosby, Stills, Nash and Young, and throughout his solo career. I couldn’t find any mention of this on The Rock And Roll Hall Of Fame site, but hopefully it will have some info posted soon. In last week’s Slumgullion I mentioned that the Milwaukee-based power pop band Trolley will be showcasing songs from its upcoming release Caught In The Darkness while performing on tour with Irish alt-rockers Pugwash. That tour now includes a September 17 show at 27 Live in Evanston. In a recent email, Trolley frontman Paul J. Wall described Pugwash as having an "XTC, ELO, Beach Boys and Beatles style." Pugwash’s new release, Play This Intimately (As If Among Friends) came out yesterday, and the 27 Live gig will be the band's first journey to Illinois.

Congratulations to WXRT’s Program Director Norm Winer on being named as a recipient of a Fifth Star Award from the Chicago Department of Cultural Affairs. As recently reported by Chicago Sun-Times media columnist Robert Feder, Winer and four others will be honored during a ceremony on September 16 at the Jay Pritzker Pavilion in Millennium Park. Winer has been guiding the progressive rock station for over 35 years. The event is free and will include performances by Sandra Delgado and Reginald Robinson; Steppenwolf Theatre; Sweet Honey In The Rock; NTO (Nicholas Tremulis Orchestra) and the WXRT All Stars featuring Kelly Hogan, Frank Orrall, JC Brooks and Jimmy Chamberlin; and The Joffrey Ballet Exelon Strobel Step-Up Dancers.

For anyone who enjoys tales of divine rule resulting from a watery tart throwing a sword, The Metropolitan Performing Arts Centre in Arlington Heights will be presenting Spamalot from September 16 through October 11. Tickets are $38.

The Leela Arts Center in downtown Des Plaines has reopened. ComedySportz Chicago is doing its improv thing there through September 12; followed by The Guild Theater’s performances of Spoon River Anthology September 18 through October 11 and Stories Of The Macabre October 16 through 31.

According to a recent article by Robert Channick in the Chicago Tribune, a free Fall Preview version of Time Out Chicago will start showing up on September 9 at restaurants, bars, stores, and other venues around the city. It will be the publication’s first printed edition since in over two years.

There will be a Doctor Who-themed Ladies Night from 6:00 to 8:00 PM on September 16 at Graham Crackers Comics at 77 E. Madison. The group usually meets at the store on the first Wednesday of each month and encourages women to “bring comics you are reading or creating, swap stories and share recommendations.” This particular event is A Fandom Tea Party that will feature free tea samples and baked goods.

Minstrel Palooza Live 2015, a seven-hour party celebrating the long-standing Minstrel Music store in Niles, will be held on September 20 at the Palatine venue Durty Nellie’s. The hard-hitting/satirical power pop band Van Go goes on at 4:00 PM, and I’ve been told more details will emerge in the near future.
Posted by Terry Flamm at 11:12 PM