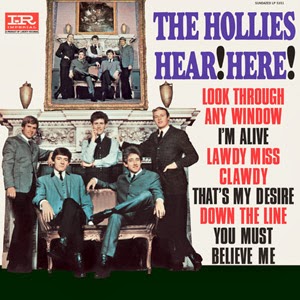 I just finished reading Graham Nash’s autobiography Wild Tales. While he understandably spends the majority of his time spinning tales of his days with David Crosby and Stephen Stills, there’s a wealth of inside information and anecdotes to please an avid Hollies fan like myself. Reading Nash’s recollections of those early days with The Hollies took me back to the Christmas of 1966, when I received the Hear! Here! LP as an added bonus to the “Stop Stop Stop” single I had asked for from one of my older brothers. The joy of discovering those ringing guitars and spirited harmonies would stick with me for a lifetime.

It wasn’t their debut, but it’s likely that Hear! Here! was the first Hollies album for a lot of Americans since it featured the hit single “Look Through Any Window.” If so, then it served as an energetic introduction. The Hollies romped through covers of classic R&B and rock songs like “You Must Believe Me,” “Down The Line,” “Lawdy Miss Clawdy,” and “Mickey’s Monkey.”

Even more impressive was that Nash, lead vocalist Allan Clarke, and guitarist Tony Hicks had begun to compose their own material. Rollicking songs like “Put Yourself In My Place,” “When I Come Home To You,” and “I’ve Been Wrong” (later recorded by The Everly Brothers), along with the melancholy ballad “So Lonely,” clearly indicated that The Hollies were well on their way to becoming one of the British Invasion’s most influential acts.

I’m hoping to post a review of Wild Tales here on Broken Hearted Toy some time next week.
Posted by Terry Flamm at 11:00 PM