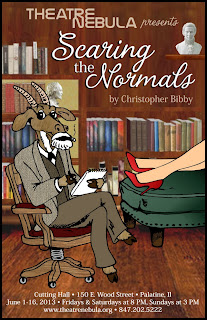 I sometimes (well, often) poke fun at my home town of Palatine's cultural heritage, but the northwest suburban village is actually serving up an impressive buffet of entertainment tomorrow evening (June 14th.)

There's a vintage car show featuring Stingrays, Mustangs, etc not far from the train station; American English will kick off the Sounds Of Summer series at the Fred P. Hall Amphitheater with its Beatles tribute show at 8:00 PM; Theatre Nebula is staging Christopher Bibby’s comedy Scaring The Normals at Cutting Hall (it runs through Sunday); and EXPO ‘76, a band of seasoned musicians, will be playing an eclectic variety of cover versions starting at 8:30 PM at Mac's On Slade. With a little effort, tourists could fit in at least parts of three of these things in one visit.

Look for Union Jacks to be flying proudly Saturday in Crystal Lake as The Cottage night club hosts its fourth annual Beatles Blast British Invasion. The event kicks off at 1:30 PM when Cavern Beat performs as The Beatles. The schedule (pronounced shedule) also features In The Flesh as Pink Floyd at 3:30 PM; Kashmir as Led Zeppelin at 5:30 PM; and American English, fresh from rocking Palatine on the previous night, as The Beatles at 8:00 PM. Tickets are $15.

On June 29th, Sons Of The Silent Age will be playing the music of David Bowie at Durty Nellie's in the suddenly bustling town of Palatine. The band’s nine members include vocalist Chris Connelly from Ministry; drummer Matt Walker, who has worked with Smashing Pumpkins and Garbage; and guitarist Steve Gerlach of The Bad Examples and Tomorrow The Moon. The show is free but anyone interested in going needs to get a ticket from the Durty Nellie’s Facebook page.
Terry Flamm at 11:36 PM