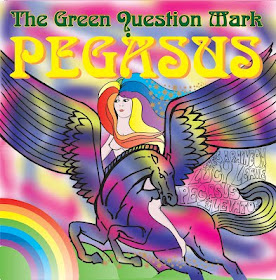 It’s only January 4th, and I’m already compiling a list of shows I wish I could have seen. I didn’t make it out to FitzGerald’s in Berwyn tonight to see a double bill of the neo-psychedelic band Tomorrow The Moon  and power pop artisans Pezband. Depending on what time you read this, you might still have time to check it out if you’re in the vicinity. Wouldn’t it be great if these two acts did more gigs together? Here’s an eye-pummeling video of “HeSawRed” by Tomorrow The Moon.

Phyllis’ Musical Inn on Division Street in Chicago will have a strong lineup of power pop bands tomorrow night when Van Go and 92 Degrees take the stage. Both acts are veterans of International Pop Overthrow - Chicago, and both have a bass-playing/back-up singing Galassini. Left Hand Foot, formerly The Fighting Moultons, is also on the bill.

As I mentioned here about a week ago, Miles Austrevich, the inspiration for the Jokes4Miles   campaign, has passed away. It was touching to see the crowd of family and friends that came to his visitation on Chicago's north side last Saturday. There are two memorials planned in the coming weeks for this courageous young man who battled brain cancer with determination and a sense of humor. The first takes place tomorrow at the Museum Of Contemporary Art, at 220 E. Chicago Avenue, starting at 4:00 PM. And there will be a celebration of Miles’ life on January 19th, at the new Jokes4Miles headquarters at 3660 W. Irving Park Road. Check out the Jokes4Miles Facebook page for more information.

Mega Dodo, the UK independent label that unleashed the sinister fun of 1960s-influenced recording artist and honorary Palatine citizen Mordecai Smyth on the world, has some interesting new releases on tap. The Honey Pot is a quartet whose latest release, To The Edge Of The World, is an overflowing garden of psychedelic tunes. The Green Question Mark’s Pegasus EP features a cover of the 1960s Hollies song, “Pegasus,” as well as the band's take on The Rolling Stones’ “She’s A Rainbow.” The previously mentioned Mr. Smyth is a member of The Green Question Mark, along with intriguingly named musicians, Marrs Bonfire, Icarus Peel, and Chrystal Jacqueline.

Amazingly, this is the second cover of “Pegasus” I’ve heard about in the past few days. Shindig magazine had a review of an eight-minute version on a colored vinyl 45 by the band Temple Music. It’s available from the Fruits De Mer label, which is also planning a vinyl LP and 7” single Hollies tribute. The original version, from The Hollies’ psychedelic masterpiece, Butterfly, is notable as being one of the few times guitarist-harmony vocalist Tony Hicks got to sing lead.

There's still time to be part of my Big Ideas project here on Broken Hearted Toy. A while back, I put out a request to musicians, writers, directors, artists, and anyone involved in the arts to send me a one-sentence description of their creative goal for 2013. I ran the first batch on New Year's Day. I’ll post more throughout the month, as they arrive. Here's a recent one I recently received:

“I am determined to do a video project with much more mass appeal than my current Coffee With Jeff.  Something more structured and amusing, and hopefully get some of my talented friends involved.” - Jeff Kelley, host/producer/writer of the weekly Internet show, Sunday Morning Coffee With Jeff.

I’m looking forward to what Jeff comes up with, and would love to be involved.
Terry Flamm at 10:18 PM