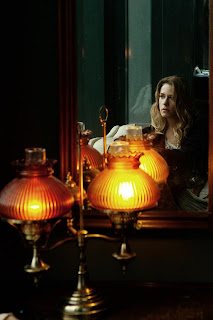 Photo from Vicki Peterson's Facebook page. Is this the year she goes Psycho?

The Elvis Brothers once sang, “I got big ideas on my mind,” and the start of a new year always seems like the perfect time for people to present those ideas in the form of resolutions. So a while back I put out a request for musicians, writers, actors, directors, producers, artists, publicists, and all creative types to tell me what they’d love to accomplish in 2013.

I didn’t promote the concept as much as I should have, due mostly to the hectic holiday schedule. I’ve decided to extend the Big Ideas concept through the month, so that people who are interested in promoting their projects can still participate. Just send your 2013 creative goal to me in care of this blog, or if we’re Facebook friends, via a message. In the meantime, here’s a mix of predictions, suggestions,  and responses.

“Record a new CD, reverse earth’s polarity BACK on 12/21, smile at strangers, and perfect cold fusion but keep it to themselves.” -  Coed power pop band and International Pop Overthrow - Chicago regulars, The Right Tidys. So that’s how we escaped the Mayan Apocalypse!

According to an email I received from drummer Bobby Elliott on October 3rd, The Hollies plan to release a live CD at some point in 2013, “to round off 50 years of making records. We then tour New Zealand, Australia, and of course, here in Britain and Ireland.” Mr. Elliott and guitarist-vocalist Tony Hicks are the only remaining original members in the band. By the way, please come to America.

SUGGESTION: If WXRT gives us another Live From The Archives this year, they should also offer something to keep all the discs in. Either a blue diamond-shaped container, or a box with the FM rock station’s diamond logo in neon on top. It should be free to anyone who can prove they own all 15 volumes from the series.

“Sell one of my current books to a traditional publisher in a big house & write a new book that becomes a NYT bestseller for weeks on end. No biggie.”  - Author Kym Brunner.

Good Ol’ Freda was one of many highly worthwhile Kickstarter projects that appeared in 2012. It’s a film about Freda Kelly, the official secretary of The Beatles International Fan Club pretty much for the band’s entire career. Kelly was a guest at Fest For Beatles Fans - Chicago in August and came across as totally charming. Good Ol’ Freda was also one of 10 films to receive a grant from The Women in Film Foundation as part of the 27th annual Film Finishing Fund. It would be nice to see it released some time this year.

“Take my creativity deeper through retreats with my fellow writers and wider by exploring different genres (MG and steampunk as well as YA SF),  while continuing to grow my reader fanbase by writing and publishing fiction they want to read.” - Author Susan Kaye Quinn.

At some point in 2013, promoter David Bash will hit the road and start bringing International Pop Overthrow, his traveling showcase of power pop and indie rock bands to cities in the U.S., Canada, and England. Usually, IPO hits Chicago around the middle to end of April. I’m looking forward to another 10 days of discovery and fun.

“My goal for 2013 is to continue to work with incredibly cool bands. I am really grateful for the talented people I work with.” - PR Specialist at Western Publicity, Heather West.

My old comedy group, Famous In The Future, has been dabbling more and more with its alt rock side project, The Rut. Expect more of that in 2013. Also, founding member/performer/writer Frank Carr has been kicking around the idea of creating a documentary about Famous In The Future, which got its start in 1989.

“Continue work on our third album, which we've started recording with Daniel McMahon at The Midwest Sound in Rockford.” Mike Benign from The Mike Benign Compulsion.

A while back, Bangles vocalist-guitarist Vicki Peterson created a Kickstarter project with former Cowsills member Susan Cowsill, under the name, Psycho Sisters. There have also been reports of Bangles vocalist-guitarist Susanna Hoffs wrapping up her third Sid & Susie Under The Covers collaboration with Matthew Sweet. With any luck, we’ll see both of these efforts, as well as lots of other Bangles solo and group activity in the coming year.

“Focus on my craft to build stories and characters readers will remember.” - Author Veronica Rundell.

SUGGESTION: The Bangles should participate in the annual Record Store Day this April by releasing some sort of rarity on 45 RPM vinyl. Maybe a version of “I Can’t Let Go” by The Hollies, which Peterson and Cowsill covered when they were with The Continental Drifters.

“In response to an editor's suggestions and favorable critique of a picture book manuscript, I resolve to rewrite and create a sketched dummy/w 2 original illustrations ... and have closed my facebook accounts until I reach that goal.” - Book illustrator/writer Terri Murphy.

As for me, I’m determined to actively seek out a publisher and/or agent for my three novels. I’ve just completed one set in Chicago's alt-rock scene in the mid-1980s, but need to go back and make some edits so the narrative is more unified. I’ll be writing more about this book in the near future.
Posted by Terry Flamm at 10:13 PM

Interesting to read everyone's goals - good luck to all!