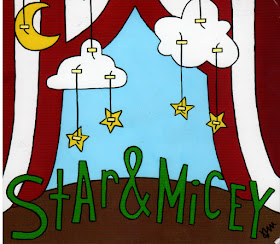 If you live near downtown Chicago, you might still have time to catch Phil Angotti, Charlie Short, Jonah Knaut, Peter Storms, and Dolan McMillan performing The Who’s Quadrophenia and The Rolling Stones’ Beggars Banquet tonight at Reggie’s Music Joint on State Street.

And now on to the review:

The name sounds like an MTV cartoon series, but Star And Micey is actually a three-piece band from Memphis, TN with a knack for eclectic indie rock. I Can’t Wait, the second effort from acoustic guitarist-vocalist Joshua Cosby, bassist-vocalist Geoff Smith, and electric guitarist-vocalist Nick Redmond, covers a lot of ground on its four tracks, starting with the melancholy but engaging “No Pets Allowed.”

Producer Dennis Herring (Elvis Costello, Modest Mouse) reportedly wanted to capture how these guys sounds live, and on the foot-stomping “Love,” it feels like they’re out on your front porch. The song is an appealing jumble of tempos and instruments, including some violin playing by Memphis Symphony Orchestra member Jessie Munson. Cosby, Smith, and Redmond weave angelic harmonies for the easy-going “Soul Stormin,” which features Herring on guitar. The quirky title track would be a perfect fit for alternative rock stations, alongside the likes of Luminaires, Of Monsters And Men, and Edward Sharpe And The Magnetic Zeros.
Terry Flamm at 9:43 PM