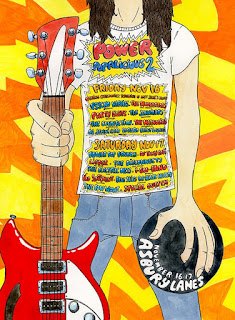 The Chicago Tribune carried an interesting article by Lonnae O’Neal Parker from the Washington Post yesterday about the “Women Who Rock: Vision, Passion, Power” exhibit that’s currently being presented at the National Museum of Women in the Arts in Washington, D.C.. Stretching back to blues pioneers Bessie Smith and Ma Rainey and up to today’s indie, folk, and rap artists, the collection of instruments, outfits, and lyrics aims to show how women have found power through their music. After finishing its run in Washington, D.C., “Women Who Rock: Vision Passion, Power” will kick off a three year tour of the United States. Hopefully, that will include a stop in Chicago.

How about some Infinite Sadness with that chai latte? Newspapers and blogs around Chicago are reporting that Smashing Pumpkins frontman Billy Corgan has opened a dazzling tea shop called Madame Zuzu’s in suburban Highland Park. He and business partner Sharon Mackin-Norberg envision a hub of live performances, hot beverages creative discussion.

Singer-guitarist Paul Collins, of The Nerves and The Beat fame, will be staging Power-Pop-Licious II at Asbury Lanes in New Jersey on Saturday, November 17th. The scheduled acts for the fest include Collins, The Electric Mess, The Disconnects, and Esther Crow. Admission will be $15.

Also on the East Coast, Power Popaholic has several acts lined up for its eponymous fest at the Lulu’s club in Port Jefferson, New Jersey. Artists include The Heartless Devils, Lannie Flowers, and The Turnback. The fest kicks off at 8:00 PM, admission is $10.00.

Chicago band JIP, fronted by Jim Gwynn, has a record release show for its Sparks, Flames, and Names CD coming up on October 12th at the Hard Rock Cafe on Ontario in Chicago’s River North area. The Burrows, The Lucky Dutch, and The Employees are also performing that night. The show starts at 10:00 PM, admission is $10.

Chicago Ideas Week returns for its 2012 edition, starting October 8th, and will offer several creative discussion, labs, and presentations at various locations around the city through October 14th. Speakers include editors, executives, media personalities, and performers. Tickets to most event are $15 unless otherwise indicated.

Signal Ensemble Theatre is inviting patrons to meet playwright Robert Askins tomorrow night after a performance of his play, Princes Of Waco.
Posted by Terry Flamm at 11:24 PM