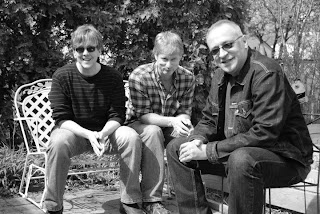 Pop Dollys have only been around since 2009, but all three members, bassist-vocalist Mike Cohen, guitarist-vocalist Tony Kola, and drummer Jim Hurley, are veterans of the Midwest’s hallowed power pop scene. The trio has been making a name for itself with regular live gigs, particularly at International Pop Overthrow - Chicago. The soon-to-be released CD, Aloud, explores virtually every nuance of power pop, with breakneck speed and irresistible melodies.

“Never Gonna Miss You Again” and “Love Is A Dream” are big-sounding gems in a Cheap Trick/Off Broadway vein, while “And I Want” has more of a revved-up rock-a-billy feel. On “Like A Hurricane,” Pop Dollys dispense some barbed social satire at the expense of the late hotel maven, Leona Helmsley, and “Your Move” evokes an eccentric 1960s hit single from a Brit Invasion band. A freewheeling cover of the T. Rex song "Metal Guru" adds to the fun. “Sketching Miss Black” and “Different Now” find the band adroitly adding spacey keyboards and offbeat sound effects into the mix, similar to the way The Elvis Brothers did on “I’ve Got Skies For Her.” Just about everything on Aloud zips along, but the slower “Cathy’s Crying” and mysterious “Little Notes” are successful as well.
Posted by Terry Flamm at 9:21 PM